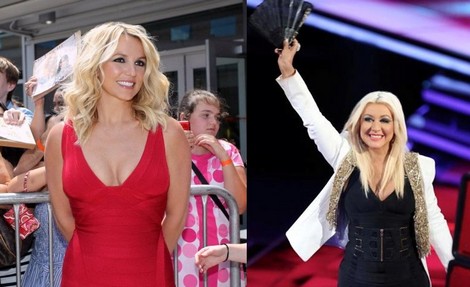 Britney Spears and Christina Aguilera are facing off,  Britney on The X Factor USA and Christina on The Voice.  Do you wonder who is winning the battle of the song shows – Britney or Christina?

Talk Meter, a tool that measures chatter on Facebook, was were able to look at who is winning the battle of the song shows.

Britney is currently leading Christina in mention count on Facebook. Britney also saw a higher spike on the night “The X Factor” premiered with her mentions going up 2,375% vs. Christina’s mentions spiking only 450% (still quite impressive!) on Monday’s premiere of her show, “The Voice.”

The ratings are in and The Voice was the winner last week, but people are definitely buzzing about Britney on Facebook.

Fans in North Dakota, Missouri, Pennsylvania, Iowa and Delaware are talking about Christina more than any other state

***MENTIONS SPIKE: Mentions of Christina jumped 450% during the Monday premier of the show

Scored highest with women 25-34; women 13-24 followed closely behind; along with men 25-34 – seems like Britney’s male following boosts the gender numbers

Fans in Rhode Island, New Jersey, New York, Louisiana and California are talking about Britney more than any other state

***MENTIONS SPIKE: Mentions of Britney jumped 2,375% on the Wednesday premier of the show

So where do you stand?  Are you team Britney or Team Christina?  Hit the comments and let us know your thoughts!

Emma Watson is the Most Dangerous Celebrity

Demi Lovato is a Clutz and Owns It!