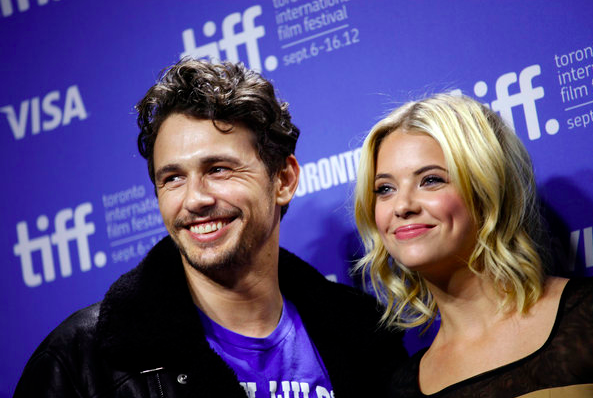 Ashley Benson and James Franco had been a rumored pair since they were seen around New York City together earlier in October, but when they were spotted holding hands at the Los Angeles Haunted Hayride, the relationship was confirmed. Pretty Little Liars star Benson, 22, met the 34-year-old while on set of their movie Spring Breakers.

The scandal is not oniy in the age difference- it is in the confliction it caused with Benson’s romantic past. According to RadarOnline, while Ashley was filming Spring Breakers, she was also dating Justin Bieber’s good friend, Ryan Good. Not only did she ditch Good for Franco, but she ticked Selena Gomez off in the process.

“Selena feels used and kind of punched in the face seeing as though she got Ashley the role and Ashley just used the opportunity to break her friend’s heart,” a source revealed to RadarOnline. They added, “After Emma Roberts turned down the role because she didn’t want to gain weight for it, Ashley practically begged Selena to get her in front of producers for the part. She did, because she thought they were all friends, but it was clear early on that Ashley had something going on with James.”

While filming the movie, Benson reportedly became too busy to spend time with her boyfriend, Good. The source shares, “Once the shoot wrapped, Ashley told Ryan they needed to ‘slow down’ and then booked a flight to New York City to go see James’ art gallery showing.”

Do you think Benson was wrong to betray Ryan and Selena to start a relationship with Franco? Give us your opinion in the comments below.

Apple Announces iPad 4 To Compete With Kindle Fire, Misses The Mark With Outrageous Prices, So You Probably Won’t Find It Under The Christmas Tree!