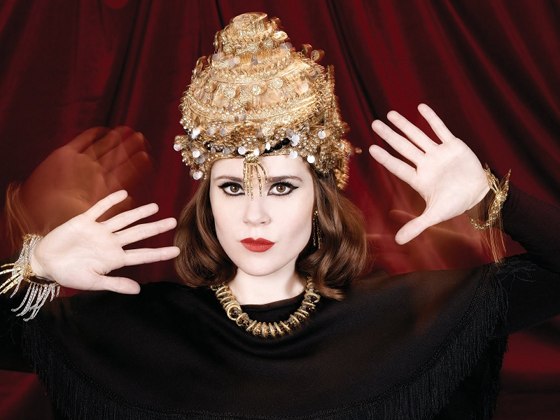 Thank god! As any addicts of the Kate Nash sound know, it has been two painful years (and six grueling months) since her last album, My Best Friend Is You, was released. Since then, we’ve been surviving on the nectar of shaky YouTube videos of her live performances, inserting our own names into her song Caroline Is A Victim, and just feeling generally sorry for ourselves that her recession into touring the British Isles almost exclusively can bring about such pain. But, dust off the cobwebs that have formed during your musical hibernation–the folksy Brit is back with a vengence.

Her new song Fri-end? is a mix of spunky, assertive girl power, disguised as a vampire party. The music video shows Kate as a vampire, singing about a friend who’s phoning it in. It has a catching chorus and is danceable. Kate tweeted, “new song title is actually Fri-end? with a question mark at the end & said slow cause like you know they are totally not your friend.”

She released the music video on her website on Halloween morning, and fans can sign up to her news letter to get a free download of the song. (Click here to check out the download info!) Kate has mysteriously tweeted that info about her new EP will be announced in the next few weeks, and I am hoping that all the secrecy is to build up buzz before she announces another amazing US tour. She’s known for never performing the same song twice–there’s always some unique change. Would you see Kate Nash in concert? Have you been feeling the pain of her disappearance? Check out her music video for Fri-end? below!