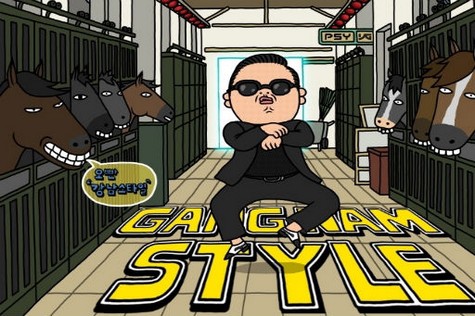 Macarena achieved this level of fame in 1994, but never before has one single song so defined an entire generation of music lovers. On the 15th of July, 2012, South Korean rapper Psy released a dance music hit, complimented by a catchy music video, to an unsuspecting planet. The song gained considerable popularity almost overnight and exploded onto the music scene with much bravado and chutzpah. Ladies and gentleman, we’re not talking about Taylor Swift’s lifeless songs, we’re talking about Gangnam Style.

381 million people watched the YouTube video of this sensational hit. Several celebrities, including Nelly Furtado, T-Pain, Katy Perry, Britney Spears and Adam Levine, shared the song on their personal YouTube pages and made Gangnam Style the most important and most social culture defining song of the 21st century. In fact, the video has been so extremely popular that it was recognized by the Guinness Book of World Records as the most “liked” video in YouTube’s history. Beat that Justin Bieber!

According to Gangnam Style’s Wikipedia Page, “Gangnam Style” is a Korean neologism that refers to a lifestyle associated with the Gangnam districtof Seoul, where people are trendy, hip and exude a certain supposed “class”. The term was listed in Time’s weekly vocabulary list as a manner associated with lavish lifestyles in Seoul’s Gangnam district.” Psy, the most popular musician to hit the music industry since Justin Bieber, spoke to CNN in an interview over the song’s origins, “People who are actually from Gangnam never proclaim that they are — it’s only the posers and wannabes that put on these airs and say that they are ‘Gangnam Style’ — so this song is actually poking fun at those kinds of people who are trying so hard to be something that they’re not.”

Oh and how much fun that poking is – it’s much more addictive than poking crazy people and serial freaks on Facebook.

The level of Gangnam Style’s popularity is unparalleled. The catchy music video has been likened such pop culture changing moments as Asteroids, Pac-Man, Nintendo, PlayStation, CD’s, 3D cinema, Avatar and Titanic. It brought South Korea to our airwaves and we doubt it’s going to leave anytime soon. So, guys and dolls, if you walk down the street and you see a flash mob swinging their hips to Gangnam Style; just know that you’re experiencing pop culture history in the making.

Are you a fan of Gangnam Style? Have you watched the music video? Let us know in the comments below.