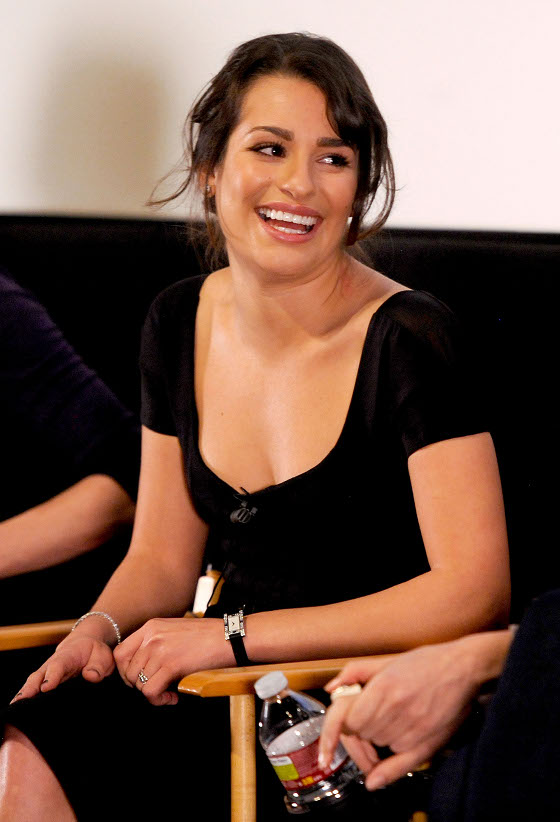 Woah! Didn’t see this one coming. Broadway alumni and Glee star Lea Michelle appeared on Ellen yesterday, where she talked about her New York accent, her Broadway debut, and her current role on Fox‘s hit show Glee. Lea had to take voice lessons before starring in a musical that took place in 19th century Germany, and admits that her accent comes back when she’s speaking on the phone with her mom. The surprising news was that Lea hates to dance! It seems strange that she’s ended up in a profession that revolves entirely around singing and dancing, doesn’t it?

The young star confessed, “It doesn’t come to me easily. I’m not a good dancer, so it’s something that challenges me. But it’s good to have something every day to go to work that you have that can make you a little nervous…Even if I have to do the simplest beginner ballet routine, I’d be like ‘I will take all my clothes off and sing naked instead of me having to dance right now.” She added, “being given a specific type of choreography” is what challenges her, but muses, “if I could just dance and do whatever…I don’t think it would look that good.”

Considering how amazing the dance routines are on Glee, I think it’s all in her head! Lea is currently working in New York City to shoot some of her Glee scenes, and the cross-country job can’t be easy! She’s previously cited a vegan diet as the only way she can get enough energy to play too-perky Rachel Berry. The new episode of Glee airs Thursday night at 9pm on Fox, and Finn is finally back. He walked in on a late night dinner date between Rachel and NYATA hottie Brody, who is inexplicably attracted to her. The drama is heating up–will you turn in to critique Lea’s dance skills?

Teen Mom Secrets Revealed: Which Teen Mom’s Are On Drugs, At War And Homeless