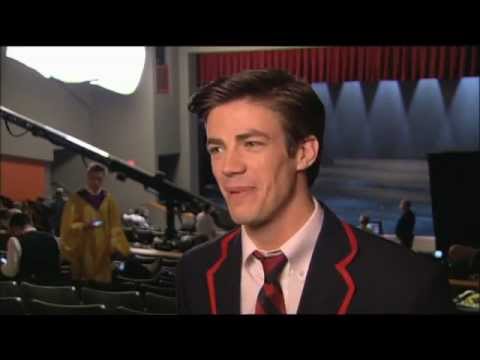 Grant Gustin was the prime antagonist for Glee’s 3rd season, as Sebastian, the manipulative Warlber who tried to break Klaine into teeny weeny itsy bitsy pieces. Sebastian had a change of heart near the climax of the season, but his moral repentance didn’t have any effect on his past wrongdoings. Grant, on the other hand, is now moving away from Lima, Ohio to Beverly Hills, California. According to latest reports, the CW faced Grant will find his new home at the real CW network, starring in 90210, the next generation spin-off from Beverly Hills: 90210. Grant will be playing a college student who had a privileged upbringing during a small, three episode narrative arc in the new season. He tweeted on Tuesday morning, “Great first day at 90210! Good people over here. Excited to be a part of the gang for a bit.— Grant Gustin (@grantgust) October 30, 2012.”

The 22-year-old Grant was born in Norfolk, Virginia, where he graduated from Granby High School and attended the BFA Music Theatre Program at Elon University in North Carolina. Grant’s first television break came in the Discovery Channel’s spooky re-enactment show, “A Haunting”. Only in 2011 did Grant’s television dreams come true when he scored the role of Sebastian Smythe. His recurring character caused heaps of drama between Blaine, Kurt, and the rest of the Glee kids. Fortunately, for fans of Grant, his stint on 90210 will not see him leave Glee forever, as he is already slated for a 4th season return to the popular singing juggernaut.

Will Sebastian’s return cause more friction between the splintered Blaine Anderson and Kurt Hummel? Will his return signal a different Sebastian, one with a moral code? We’re eating our hands from excitement. What do you think about Sebastian’s return? Let us know your thoughts in the comments below.