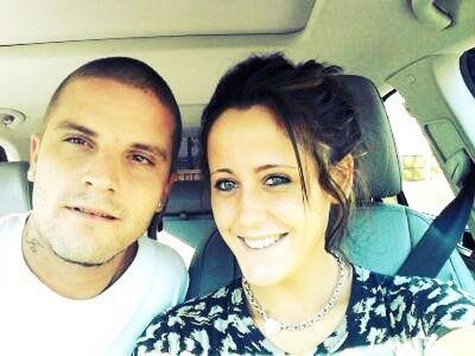 Dude, are you serious right now? Yes, it’s official, Jenelle Evans is single once again! The Teen Mom star broke up with her latest boyfriend, Courtland Rogers, this past weekend. She has been jumping between men like a flea jumps between the disease ridden heads of a squirrel mass suicide. Not only has she been dating and breaking men, but she’s also infamous for not being able to make up her mind. She’s rebounded more than a manic game of ping-pong, mostly between Kieffer Delp and Gary Head, but will Courtland be included in her list?

We honestly think that Jenelle stands in her kitchen, makes tomayo sandwiches and says to herself, “Eeny, meeny, miny, mo, which of the exes should I plough?” The Teen Mom star has two stalker-like exes waiting in the wings to catch her after her 15 second swan song, so Jenelle is able to pick and choose who she wants, when she wants him. She broke up with Kieffer a few weeks before Courtland and bitched on Twitter like a raging lunatic. Allegedly, they hate one another now, but all of us know it will only be a matter of time before our fingers hit the keyboard of reconciliation and type out an article with millions of “aww’s” and “shucks”. We all remember the abusive Gary Head and the broken engagement, but as with Kieffer, they too are chatting up a storm again.

What is wrong with this girl? Did she get the manual on “What To Do When You’re Broken Up”, or was Fed-Ex striking? Jenelle would date all of the world’s men and still not be happy with any relationship. It’s a tragedy, turned into a dramedy, turned into a comedy. Man-up Jenelle, face your issues and stop listening to “It’s Raining Men”, because a storm of tabloid feces is about to hit you squarely in the face.

How to Deal With Bullies and Bullying