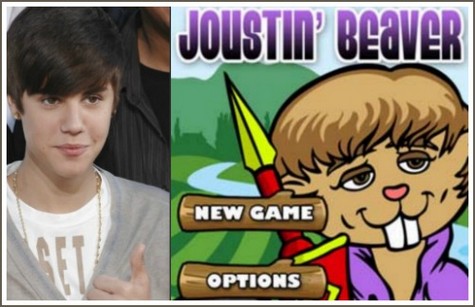 Joustin Beaver is suing Justin Bieber. Wait, what? Two weeks ago, the real Justin Bieber sent a cease-and-desist letter to RC3, and threatened to take legal action against the company if they continued the sale of their Android app that bears resemblance to the real Bieber. According to the Hollywood Reporter, “Android app maker RC3 has filed a lawsuit against Bieber, claiming it has the right to distribute its game, ‘Joustin’ Beaver’.” So, it’s basically a straightforward double sue? Why the bitchin’ and moanin’ peeps?

According to court documents, “[The] parody app portrays a beaver floating on a log down a river. The beaver presents with bangs, a lance, and a purple sweater. The beaver knocks ‘Phot-Hogs’ that are attempting to take his photograph into the river with his lance. The beaver also signs ‘Otter-graphs.’ The beaver also must dodge the ‘whirlpool of success,’ which will lead beaver out of control, while navigating the river.” Dude, are you serious right now? Why all the hoopla about a game that doesn’t really sound fun to play? The suit continues, “In an effort to comment upon the Defendant’s life, the Plaintiff, RC3 developed the aforementioned App entitled ‘Joustin’ Beaver.’ The App, a video game, is a parody of the commercial success of the Defendant and any celebrity.” RC3 believe they have a First Amendment right to “use his intellectual property and namesake.”

Dudes please take a chill pill and relax a bit, will you? Justin Bieber might have rights to his own name, but we were never informed that he has copyright to his name? How weird would it be if you wrote your name with a © at the end? It’s just a game, not the end of all existence. Do you think Justin has a right to protect himself from game developers? Did we just ask that question? Let us know your thoughts in the comments below.