Justin Bieber- New Tattoo, Pet, and Most Personal Interview Yet 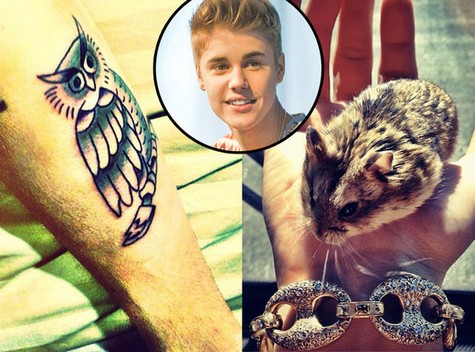 Justin Bieber added to his ever-growing collection of tattoos by getting an owl done on the inside of his arm. The 18-year-old singer posted the photo on his Instagram saying, “Before the paps get me.”

In addition to the new tattoo, Bieber also got a new furry friend for the long trips on the road. He posted the above picture of his new hampster, Pac, with the caption, “Me and #pac on the road.” With rumors swirling that Justin and girlfriend Selena Gomez are on the rocks, could the hampster be something to keep Justin busy? Bieber’s most recent interview with Oprah shows no signs of trouble between Bieber and Gomez, who have been dating for two years now.

Justin sat down with Oprah for “Oprah’s Next Chapter,” and, according to Oprah, the interview is “one of the most in-depth interviews the singer has ever agreed to do.” The interview will not come out until November, but different parts have been released.

He discusses how he makes his relationship with Gomez work by saying,  “Sometimes we got to take the back exits and do different things, but I never make her separate from me cause I don’t want her to feel like I’m ashamed of her.” He adds ,“I feel like a lot of guys do that — especially in the business. They don’t want to be seen with their girl so they’ll make them ride in separate cars and do all that ‘getaway’ stuff. When we get away, we’re getting away together.”

The rest of the interview will be released on November 25, and also shows Bieber and Oprah shopping around Chicago. Oprah claims, “It’s the biggest thing I’ve done since Michael Jackson in 1993.”