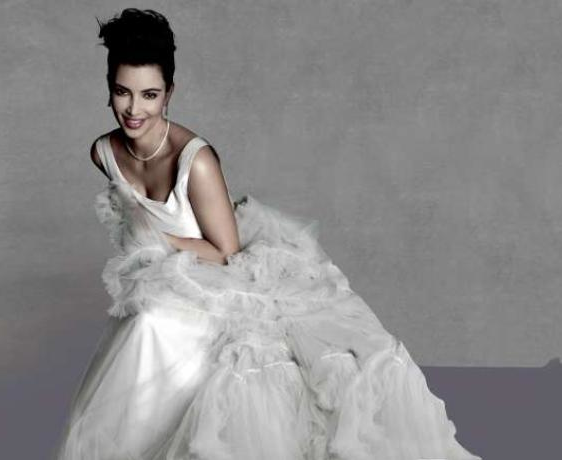 Kim Kardashian is already talking about her next wedding- before her divorce to Kris Humphries has even been finalized. The infamously extravagant wedding, which led to the 72-day marriage, seems to have been a one-time event for the reality star. While Kardashian is falling hard for Mercy singer Kanye West, she is already busy planning how to do her next nuptials differently.

The reality star opened up in the November issue of the British magazine Tatler, which she wears a wedding dress on the cover of, about her future wedding plans.

“It had always been my dream to have a big wedding, and when people said I’d made it over the top for the show, that was just me: I am over the top. But the next time, I want to do it on an island with just my friends and family and that’s it,” Kardashian says of her future wedding (which she hopes is with West, her longtime friend and current boyfriend of seven months). At least Kris will approve of the newest addition to the family because his “K” name will be easily incorporated into the Kardashian branding.

And as for that ridiculously short previous marriage? Kardashian stirred much controversy over the event, and Humphries even accused his estranged wife of tricking him into the marriage in order for her reality show to gain more popularity.  Kim claims, “that is just not the person I am. Who would honestly get married for ratings? It’s not like the ratings had dropped and we needed a boost. And for me to do it and have it not work out was the most embarrassing thing. It was risking ruining my career.”

Kim ends the interview by expressing her love for her latest beau, saying, “It’s so nice to have a best friend in this game who understands everything you’re going through. Being with someone I’ve known for so many years is comforting. He’s been there through so many different stages of my life and before I was famous, so this relationship is a different thing entirely.”