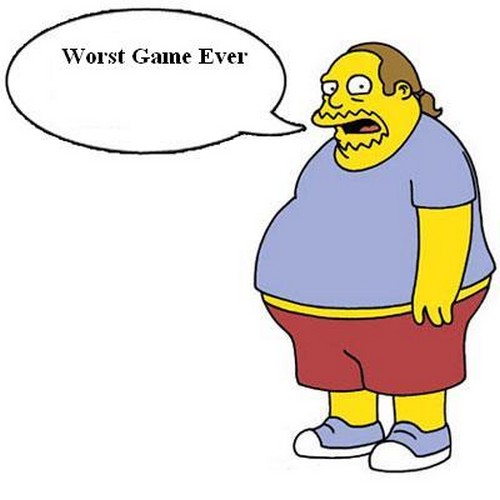 4 – Game of Thrones – The television show might be one of the best to come along in a decade, but the game is a real stinker. IGN scored this game of clones 4.0 and called it “an often ugly, buggy, and poorly delivered mess.” We won’t be touching Game of Thrones anytime soon, nor should you! HOW BAD IS IT? There shouldn’t be a “game” in Game of Thrones.

3 – Ninja Gaiden 3 – This hack-n-slash mess has been widely regarded as one of the poorest games to be released in 2012. IGN gave it 3.0 and the dubious title of “one of the worst games the action genre has yet suffered.” Ninja Gaiden 3 is a slap in the face of Ninja Gaiden fans (wait, there is such a thing?). HOW BAD IS IT? It’s gives ninjas a bad name.

2 – Amy – This much anticipated horror failed in every aspect of gaming. One of the lowest scores of the year was given to this piece of spooky dreg by IGN Magazine. A 2.0 score and a scathing review won’t have us playing Amy anytime soon. This painful game was so poorly designed that the reviewer at IGN said, “I refuse to spend another second with this game.” We refuse to play this game, or mention it, or think about it, or dream about it… HOW BAD IS IT? Let’s just say that watching paint dry is an easier method to pass the time.

1 – Steel Batallion: Heavy Armor – This game was so terribly bad that the IGN score of 3.0 caused fluffy kittens to commit suicide. The reviewer at IGN called it “a nightmare in nearly all aspects”. What they didn’t tell you, however, is that this game is so bad that it makes nightmares look like sugar highs for tooth fairies. We vote this as the worst game of the year, and should the apocalypse be brought on from this piece of garbage, we’ll blame Microsoft and Windows Vista. HOW BAD IS IT? You will need heavy armor to survive this one – it struggles to connect with your well timed moves on Xbox Kinect. Oh God, there goes the cat again…

What do you think is the worst game of the year? Did you play something worse? Let us know in the comments below.