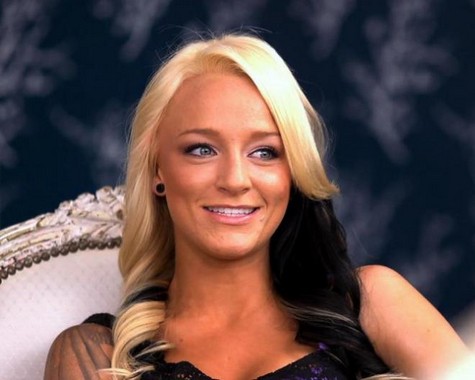 What is it with the Teen Mom girls? They always end up going through a messy split that more often than not involves naked pictures, but then end up back with the guy. This time around I’m talking about Maci Bookout.  First she was dating Kyle King but shortly after their split she hooked up with Kyle Regal, a Motocross racer. Apparently that’s a sport that really appeals to Maci. Anyway, the reality television star dumped Kyle Regal back in May after the nude photo thing, but recently decided that completely severing ties wasn’t really the way to go. The two have recently been spotted together again, leading to speculation that the two have reunited. Kyle took to his Twitter on Oct. 24th to set the record straight saying,

“You can be friends with someone after u date someone … relax ppl,” Kyle tweeted, to which Maci responded “Thank uuuuu!!”

I guess it’s good that they can still be friends but here’s what confuses me with all of these Teen Mom chicks, why do they all seem to gravitate towards the worst guys imaginable, and then give them another chance to create drama in their lives?  Seriously, there’s a million other guys that Maci could date or befriends and I have to think at least half of them would be a better influence on her. Don’t forget to that whoever Maci is dating is inevitably the momentary daddy to her son Bentley. She’s one of those mothers that lets anyone get close to her kid, or at least that’s how it seems!

Do you think Maci and Kyle are really just friends or are they on the relationship track all over again? Tell us in the comments below!