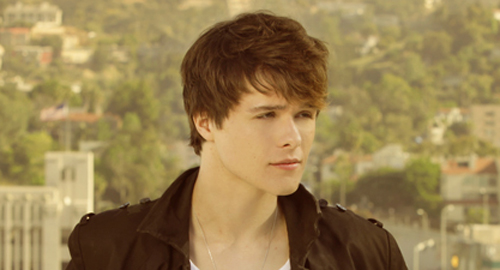 Once in a blue moon, we trip up on a remarkable musician/vocalist/artist and land face first in a puddle of life-changing vocals. Once in a blue moon, Ellen DeGeneres also trips up on a remarkable musician/vocalist/artist and lands him/her a record deal. Tom Andrews is her latest find and we’re gasping for air. Andrews hails all the way from Exmouth, Devon, England and was the second artist signed to Ellen’s Eleveneleven record label (Grayson Chance was the first). Andrews looks like a cross between Justin Bieber and Jared Leto, but it is his haunting and emotional vocals that leave a melancholic dent in your soul.

The 18-year-old Andrews made his television debut on The Ellen DeGeneres Show on the 16th of September, 2010. His life changing performance of “It’s A Man’s World” catapulted him to worldwide fame and cemented him as the most interesting young artist of the year. The young Andrews’ voice is able to caress the most hardened of notes and expose them to the bone with his transfixing eyes and beautiful vibrato. The young star’s YouTube channel has over 10 000 subscribers and his videos have received over 1 million views, including his re-produced “Carry Me On” video single. It is this video that first drew our attention to Andrews.

Released in May of 2011, this single serves as Andrews’ U.S. debut. He wrote the track himself when he was 15-years-old. The gospel under-currents in “Carry Me On” serve as the breathless fissures of a mature and powerful artist. The song is of world class value and is an iconic reminder of the talent that exists out there on YouTube. We have become an internet-based generation, so it is only fitting that new talent is discovered on a global scale and given the opportunity to present us with their music.

Tom Andrews’ vocals are stripped of the garden variety Justin Bieber-esque auto-tuning and pyrotechnics, which makes him a shining star in an entertainment universe that is filled to the brim with want-to’s, has-beens and desolate vocalists that rely more on technology than true artistry. Watch Andrews’ Ellen DeGeneres appearance and his “Carry Me On” video below. Let us know your thoughts in the comments.