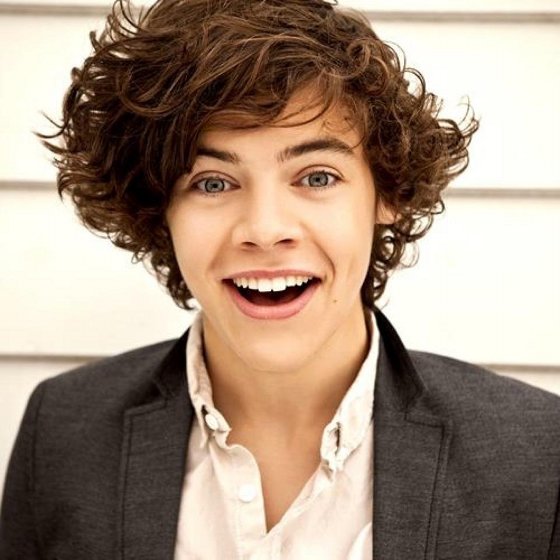 Fan girls everywhere are probably swooning with delight! The immensely hot Harry Styles of One Direction fame recently opened up in an interview about the hit series of erotic novels Fifty Shades Of Grey. We know that Harry could probably get any girl that he wants, but word is he wants to know how to treat a lady–like a sex slave! Harry told the story of how he came to read the S&M sex story masquerading as literature. “[My female friend] was like, ‘just borrow this,’ and I was like ‘Hmm.’ It seems interesting. I could probably learn from it, I don’t know. I feel like it’s an educational and interesting read.” As if that isn’t enough to get your 1D passions lit, he also said that his girl friends made him read it aloud! “A female friend of mine was forcing me to read it out to her the other day.” Harry as Christian, hmm? I don’t think I see it!

The British superstar went from zero to hero after the success of One Direction took off, but Harry is trying to keep it real. “I’m an 18-year-old boy and I”m having fun. I’m just not having as much fun as people make out.” We all know that when an 18-year-old has 20 million pounds in the bank, he has fun! He went on, “I don’t want to be viewed as a womanizer or whatever. I don’t like going crazy crazy, I like having fun but it’s nice to wake up in your own bed, isn’t it?” We agree–but Harry’s just bought a 3 million pound pad in London, which has plenty of space for a lady friend or two! But is Harry worried about falling into the the pattern of other young celebs who can’t handle the fame? He isn’t! “I can see how you could get dragged into the bad stuff, but I’ve got good friends around me, good family. I think I’ve got my head screwed on.” I’m hoping he doesn’t! Young, responsible millionaire doesn’t make headlines, but ‘Harry Styles Admits to Raunchy, 50 Shades of Grey-inspired Sex” does!

Is it possible to have so much fame, so young, and keep it together? Is Harry a womanizer? He seems to be going down the very classy James Bond route–you know, no messy walks of shame, no surprising reveals of romance. Of course, the gay rumors have been buzzing for a while–should we expect Harry to go the Lance Bass (of 1990s boyband N Sync fame) route and write a tell-all? Most importantly, when and how will the One Direction bubble burst?