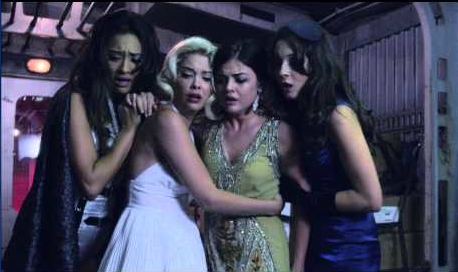 A Pretty Little Liars Halloween specials premieres tomorrow (October 23), and it looks to be frightening, drama-filled, and suspensful. Tammin Sursok, who plays Jenna, opened up to reports at the premiere, which was appropriatly held at the Hollywood Forever Cemetery.

She revealed that in this season of Pretty Little Liars, Jenna “has to figure out who she is now that she has her sight back. Is she going to be that girl that just forgives everyone or does she just have a personal vendetta against everyone? I can now say that [Jenna is] going to get back at everyone.”

When asked if someone would die in tomorrow night’s special, she revealed the answer was a defianent yes and “it’s a big character- one of the main characters.” The big death is just as shocking for the cast as it will be for the fans. Brant Daugherty, who plays Noel, admits “I didn’t even know anybody was dying! We got to the table read, and I’m flipping through the script looking for my part, and all of a sudden I see stuff about dying. It was a shocker; they threw everyone for a loop.”

While the cast is all left hoping their own fate is good, the fans are left questioning who they will see go during the premiere episode tomorrow night. Adam Lambert will be making a guest appearence for the Halloween special, and plays the last person to see Aria before she goes missing. Tune in at 8 PM ET and wish for the best for your favorite character.