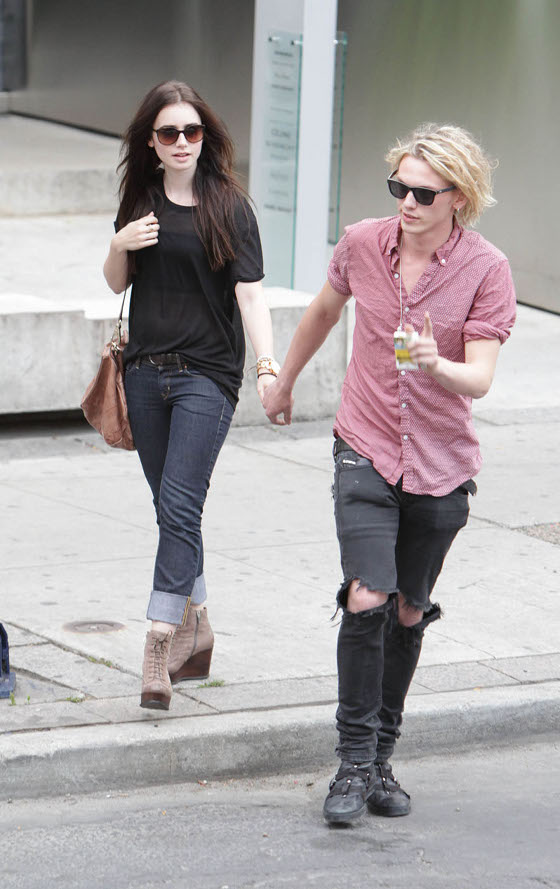 Twihards, Potterheads, Tributes, and general lovers of fantasy, don’t look back! A new film series is on its way and it will blow your mind! New York Times best selling author Cassandra Clare has gained fame for her Mortal Instruments series, which follows the lives of teenaged shadowhunters–demon slayers who can see the real world, the one filled with monsters from other dimensions. It’s an addicting combination of magic, vampires, werewolves, faeries, spiced up with a little mythology and a lot of hot (albeit it fiction), ripped demon hunters!

The series was picked up years ago, and the first film started filming in Toronto this August. It stars Lily Collins as Clarissa Fray, a girl who believes she is just a regular human until her mom is abducted by demons. Lily’s real life boyfriend Jamie Campbell Bower (ex-fiance of Harry Potter star Bonnie Wright) plays Jace Wayland, a misguided youth with more cynicism than is healthy. The couple has been training for major stunt work, but Lily recently explained the progress they’ve made.

“We’ve been shooting in all different locations here [in Toronto]. We just finished week three and I think we’ve hit every part of the movie already in three weeks, we’ve gone from early Clary to shadowhunter Clary and back again and we’re doing all the action, all the stunts,” Lily said. “I’m a little sick because we’ve been shooting nights. But the fans have come out every night, it’s so nice to have the support. I’m finally a redhead, finally working on the project, it’s been amazing.”

The movie hits theaters August 2013, and movie experts are saying it will be the next big thing! I believe it. With Twilight coming to an end, it’s time for a new supernatural series to get addicted to. The Hunger Games has three films to go, but it’s just not the same type of indulgence! As always, pick up the books before you see the movie. Readers: do you think Lily has what it takes to be Clary? Will the movies do the books justice? Only time will tell!

The Mortal Instruments: City Of Bones Director Participates in Q & A Session…