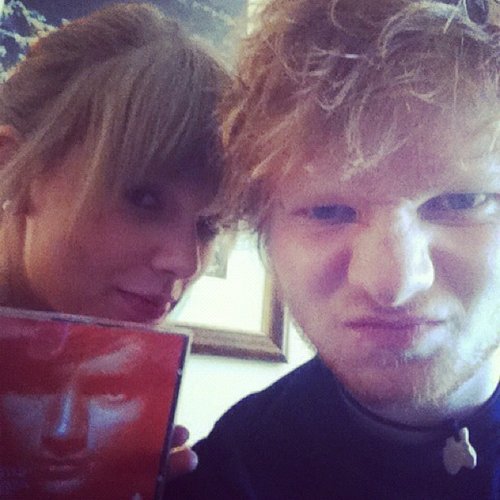 As anyone could have predicted, Taylor Swift‘s new album Red is breaking records and thrilling fans with an inside look at her bizarre romantic life. Perhaps more anticipated than the album release is the impending tour. We know Taylor’s style: Summer announcement of album, late fall release, and then a tour next spring. On Friday evening she sent fans the video below, announcing tour dates, ticket sales, and her opening talent. Who is the lucky band that will travel the world with Taylor? None other than British guitarist Ed Sheeran. Taylor is recently single, as we’ve heard her relationship with Conor Kennedy ended when she scared him off by moving too fast.

The singer/songwriter is featured on Taylor’s new album, in the collaboration Everything Has Changed. For those of you who love Ed’s quirky melodies and ever-changing rhythms, I think it’s time to start worrying. His performance on Red didn’t thrill me, and as a loyal lover I have to worry: is this the end of Ed Sheeran as we know him? Is this a total sell out move? If you’ve heard his song You Need Me But I Don’t Need You, you’ll know that he is pretty defensive when people try to paint him as an ‘overnight sensation’ or ‘sell out.’ But I have to say: while her fame is tenfold to his, I think he greatly outweighs her in talent. We know they’re good friends, having collaborated on this song, and now planning what will end up a year-long tour together. Could there be something more going on?

The two are constantly tweeting each others praises,

@EdSheeran: Bit late on this I know, but my mate @taylorswift13’s single ‘we are never getting back together’ is out in the UK now! Like….ever.

@TaylorSwift13: Just looked at the nominees- my buddy @edsheeran is nominated for an EMA too!

@TaylorSwift: MISS YOU BUDDY!!! RT “@edsheeran: @taylorswift13 congrats on being a BAWSE”

Taylor also posted a video of the two hanging out in a kitchen, singing Ed’s hit Lego House together in May. Check it out:

And check out Taylor’s tour annoucnement here! I love Ed Sheeran, but don’t think I’ll be attending this tour. I prefer the smaller venue, and the venue by my house seats 20,000! Will you be picking up tickets?