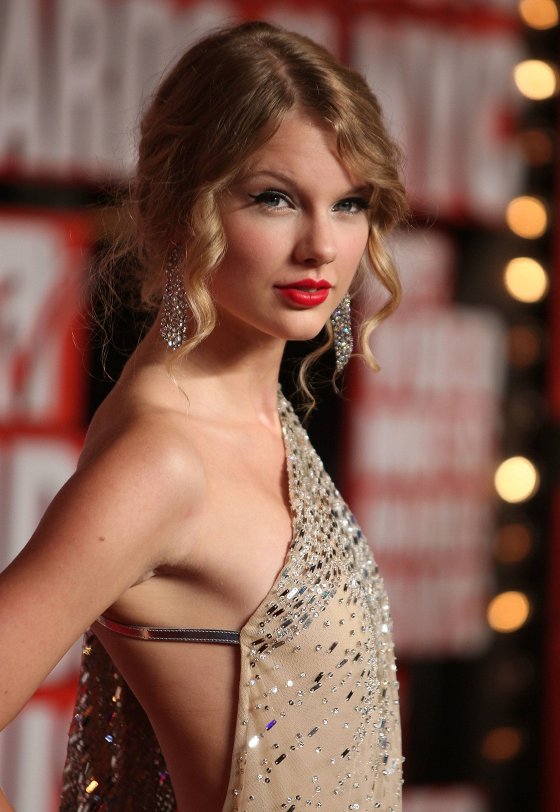 What is it called when a woman womanizes men? Manizing? Taylor Swift is probably the world’s biggest manizer. Her platinum records contain the stories of all of her exploits, ranging from true love songs, epic fights, and apologies. But now Taylor is opening up about how she is always in a relationship, and it sounds like the doe-eyed country star is actually quite the manipulative vixen! When asked if her boyfriends know to expect a song or two (good or bad, depending on their behavior!), Taylor explained: “Well…it’s not like its in fine print, but music is absolutely everything that I am and everything that I stand for. It’s not my fault if someone gets into a relationship with me and then cheats and I write a song about it.”

I think that any man who gets involved should know he’s got it coming! I think her luckiest ex is probably Joe Jonas, whom she dated for about three months and was so obsessed with, he got three songs! Forever and Always is all about the promises he broke, Better Than Revenge was targeted at Camille Belle, the woman who stole him, and Last Kiss is a weepy, Kristin Stewart-esque song about not showering and moping about in your ex’s clothing. Maybe Taylor is having trouble finding real men to date because they’re all too smart to become involved with her. Is that why she’s dating 18-year-old Connor Kennedy? Or is she just hoping to become American royalty?

So how does Taylor keep hooking men in? It seems like she would have a pretty thorough screening process in place by now, but it turns out she hasn’t refined it yet! “Even after it explodes into a million pieces and burns down and you’re standing in a pile of the ash of what it once was thinking, ‘Why did I ahve to meet this person, why did this have to happen?’ But then when you make eye contact with someone across the room and it clocks and, bam, you’re there. In love again.” So there you go, gents! If you’re looking to become Mr. Swift, just make eye contact. Although she said she falls in love easily “if it’s the right person,” I have to wonder if she thinks John Meyer was the right person? Or Taylor Lautner? Jake Gyllenhaal? All of these short, traumatic relationships in her closet–were they the right person?

She explained further, “I think I have to trust that you end up with the person you’re supposed to end up with, and that everything in between is there to teach you stuff.” So I guess she just sees her long line of exes as life lessons! A mature approach. She added, “Plus it makes for great stories.” I guess if you have the talent to turn every relationship–no matter how short lived–into a number one song on iTunes, you’d be more willing to dive into dating over and over! With her next album Red dropping in three short weeks, we are positively dying to know what sort of cray cray drama will be harmonized for all the world to hear! Will you be picking up a copy (or, more likely, downloading it)?