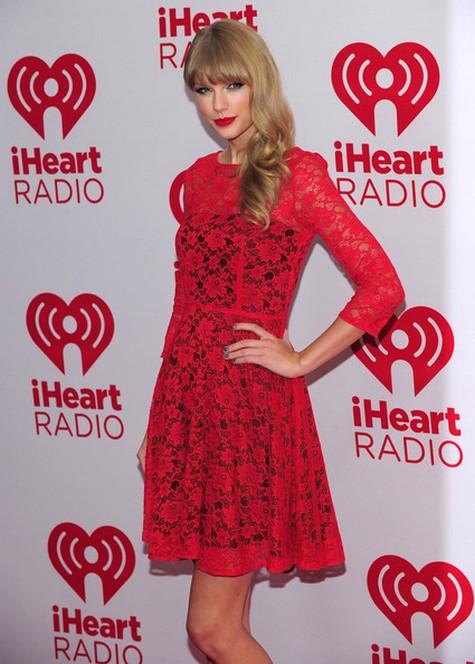 Swifties everywhere rejoice! With three short weeks until the country queen’s fourth album, “Red”, is released, Taylor Swift is treating us all to sneak peaks and early releases of some of the album’s hits. We’ve heard a few–the record breaking “We Are Never Ever Getting Back Together”, the tragic “Ronan“, inspired by a mother’s account of losing her child to cancer, and “Begin Again”, rumored to be about her new beau Connor Kennedy. The title song, “Red” has a country sound like Swift’s first album. In a short intro to the song, Taylor explained the song and her unique perspective on relationships.

“I wrote this song about the fact that somethings are just hard to forget because the emotions involved with them were so intense. And to me intense emotion is red.”

The snippet of the song preview contains the lyrics: “Losing him was blue like I’d never known. Missing him was dark grey all alone. Forgetting him was like trying to know somebody you’d never met. But loving him was red.” During the album release date announcement, Taylor described the emotions that went into writing the CD. “I ended up being inspired by a lot of really crazy sort of 0 to 100 and then hits a wall and then explodes relationships . . . .really dysfunctional and not good generally.” Taylor is normally pretty discreet about PDA, but lets loose with her songs. Any guesses on who this new hit is about?

The song will be available on iTunes tomorrow, Tuesday, and the album is out on October 22nd. Will you be picking up a copy, or has Taylor jumped the shark? The bits we’ve heard show her branching out, doing pop, country, and there’s a rumored grunge track. Can we make a list of who’s on the CD? Jake Gyllenhaal, Connor Kennedy, Ronan, who else is there? I guess we’ll have to wait for the CD to decode her secret lyric messages!

Check out her preview below!

The Sims 3: Seasons – Most Anticipated Expansion Pack In Sims’ History?