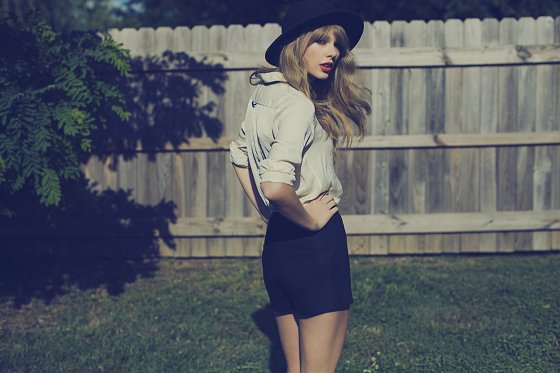 Taylor Swift loves keeping secrets, but she always lets loose when writing music. The classy celeb always keeps quite during interviews, and laughs off personal questions, but a lot of her music is totally explosive and damning. Girl doesn’t mind calling boys out if it’s in a song! So what’s the story behind her new music on the just-released album Red? In her lyric books Taylor always leaves secret messages for fans to decode. Random capital letters can be strung together to form clues. Check out our decoding skills:

1. State Of Grace – LOVE DOESN’T COUNT AFTER GOODBYE
2. Red – SAG
3. Treacherous – WON’T STOP TILL IT’S OVER
4. I Knew You Were Trouble – WHEN YOU SAW ME DANCING
5. All Too Well – MAPLE LATTES
6. 22 – ASHLEY DIANNA CLAIRE SELENA
7. I Almost Do – WROTE THIS INSTEAD OF CALLING
8. We Are Never Ever Getting Back Together – WHEN I STOPPED CARING WHAT YOU THOUGHT
9. Stay Stay Stay – DAYDREAMING ABOUT REAL LOVE
10. The Last Time – L.A ON YOUR BREAK
11. Holy Ground – WHEN YOU CAME TO THE SHOW IN S.D
12. Sad Beautiful Tragic – WHILE YOU WERE ON A TRAIN
13. The Lucky One – WOULDN’T YOU LIKE TO KNOW
14. Everything Has Changed – HYANNIS PORT
15. Starlight – FOR ETHEL
16. Begin Again – I WEAR HEELS NOW

So Swifties, what do you make of it? Some are pretty obvoius–22 is obviously an ode to her BFFs, Everything Has Changed is obviously about Conor Kennedy and their time in Hyannis Port. Ethel Kennedy is Conor’s grandmother, who reportedly loves Taylor, which fits with the song about kids having fun at a yacht club. But SAG, maple lattes, trains? Red lipstick, activate! Let’s start storming the internet and solving this musical riddle! What do you think of Taylor’s new album? So far, I like Fearless best, but maybe this will grow on me with time!

Pippa Middleton Is A New Woman: Describes Struggles After Her Bum Became Famous