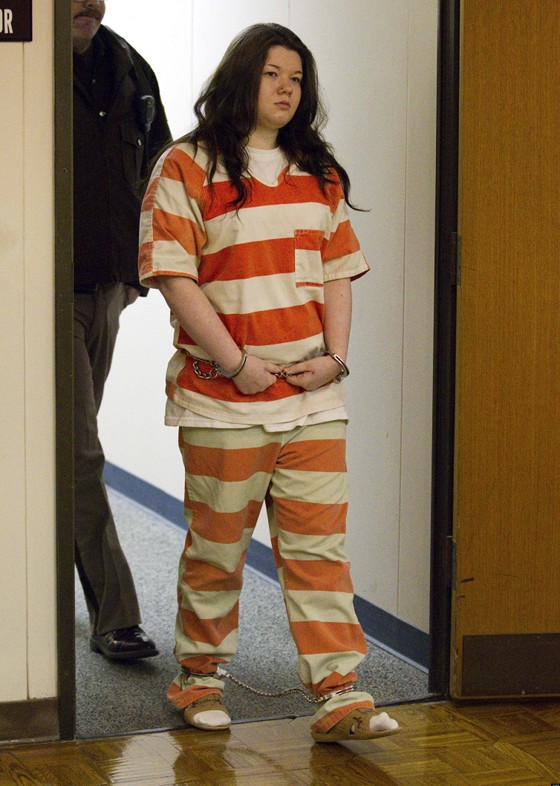 I think the appropriate expression is “no shit, Sherlock.” Yesterday we reported dad Gary Shirley’s side of the story, but now a source has told us all about how Amber Portwood is doing while serving a five-year sentence in Indiana’s Rockville Correctional Facility. Last season of MTV‘s Teen Mom, Amber was shown in rehab, working on substance abuse and anger management. She was on so many pills she just sort of wandered around the clinic, drinking Starbucks and being calm. When she skipped outpatient treatment, things went downhill. Amber refused a drug rehab program offered by a judge, and so was instead sentenced. A source explains how this is affecting her daughter, Leah.

“Amber is well aware she hasn’t exactly been the model mom for Leah, and she will do anything to make it right. It took time, but now she’s taking a hard, long look at herself in the mirror and realizing she needs to make it up to her daughter. Her first step in starting afresh was to join the prison choir. She’s actually pretty good and loves singing. She’s also been working out . . . Amber also keeps a diary of her days inside. The writing is helping her find peace within herself . . . the prison offeres parenting classes and Amber was quick to sign up for them too—if it helps her be a better mom to Leah, then she thinks its worth doing.”

This is great news for Amber. It sounds like she is taking her stint as a time to try new things, learn to be happy, and so on. Of course it’s a lot easier when you just ditch your 3-year-old daughter! The source concluded, “Amber wants to use this experience to make herself a better person.” Which is admirable. But wouldn’t it have been better to just, oh, I don’t know, go to the rehab program the judge offered so you can see your kid?

So how is Leah taking this? Amber was interviewed by Dr. Drew Pinsky for the MTV special Amber Behind Bars, where she explained that ex-fiance Gary Shriley “has my daughter, and anytime I get mad at him on the phone, he hangs up on me! Leah can be brought in, but it all boils down to Gary, as the guardian, to sign the papers . . . I’ve sent him visitation papers twice. I think he’s trying to protect Leah.” Amber says that Leah doesn’t know where her mom is, and asks to visit her. Dad Gary has explained he is trying to protect her by saying that mommy is on vacation. What do you think? Can Amber turn it around? It sounds like she won’t be seeing Leah until she’s 8-years-old, when she gets out. Can their relationship be saved?