The Hobbit In Your Pocket: Movie Coins To Become Legal Tender In New Zealand 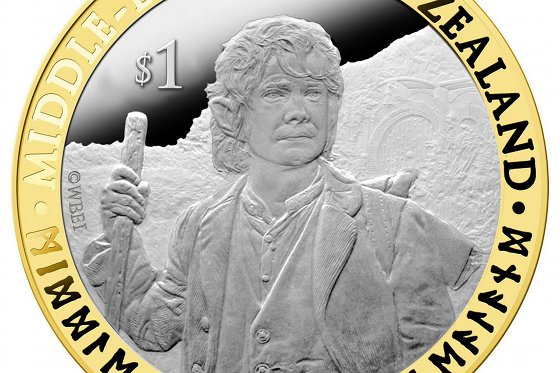 For many fans, reading the books and seeing the movies isn’t enough. There are themed parties, costumes, comic cons, parody videos, and on. Like many film series, The Hobbit will have memorabilia allowing fans to take home replicas of their favorite props. Think the gag gift of Hermione‘s time turner from Harry Potter, or Arwen‘s Even Star pendant necklace from Lord of the Rings. Well, The Hobbit is going a step further. They’ll be releasing sets of collectors coins, some costing as much as $4,000 and being an ounce of pure gold. The difference is that they’re real money–at least in New Zealand!

“Featuring characters such as Bilbo Baggins and Gandalf the wizard, the coins’ face value will only be a fraction of what it costs to buy them. Best keep them precioussssss, Gollum. The most expensive, made from one ounce of pure gold, costs more than 350 times its face value, setting fans back $3,695 but worth only $10 should anyone try to buy their lunch with it. The cheapest coin is available for almost 30 times its face value – a $1 coin on sale for $29.90.”

YES PLEASE. Judge me all you like, but I would be proud to own the $1 coin! I doubt that anyone will use it as currency, unless they’re filthy rich and don’t care about preserving the integrity of the coin. Obviously the government is making them legal tender as a nod to the film enterprises (Lord of the Rings and The Hobbit), both of which were filmed in New Zealand, boosting tourism like nothing else could. Maybe one day someone really thirsty will use their coin on a bottle of Dasani, but don’t hold your breath! Can you imagine working as a lowly cashier, and having someone hand you a coin to pay $20, but it’s worth $4,000? This is a great stocking stuffer for fans. The coins go on sale in November!

You Are Beautiful, Kind, Intelligent and Important – Don’t Believe It? Read Below To See How We Know This

A New ‘Lord of the Rings’ Video Game