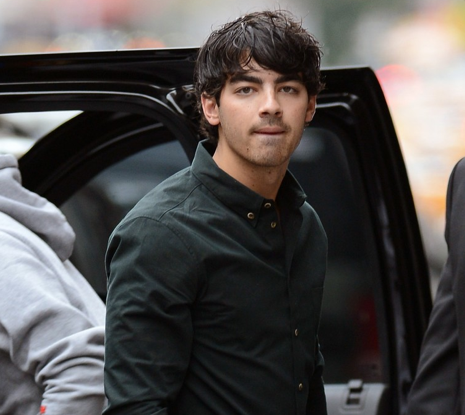 Joe Jonas was spotted heading into rehearsal for his rehearsal at the IZOD Center in New York City on Sunday (October 7). Joe and his brothers Nick and Kevin are busy getting ready for their performance at Radio City Music Hall, which will take place October 11th. Tickets can be purchased from VyRT for an online experience of the concert.

Nick, the youngest member of the Jonas Brother trio, recently opened up to Newsday about the brothers’ newest album, saying “We’re so thankful our fans have given us the time to make this album. It goes along with us taking control of our own destiny.” He also talked about the brothers’ plans after the concert:

We’re most excited about knowing that we could do whatever we want. We could partner with someone — that’s a possibility. At this moment, it’s about creating it first because we really want it to be our vision overall, without other input taking away from that. Then, maybe we can find a home for it for distribution or something. We’ll leave it all up in the air right now and just create.

As for the concert on October 11? Nick says, “It’s the kickoff again of the Jonas Brothers.” Joe added, “We want to get the fans excited about the new music,” adds Joe. “Everything’s online these days so you play one song, and it’ll be all over the world in two minutes.” The famous brothers have not made any music together in three years now, so it will be interesting to see how different their sound will be this time around. Are you looking forward to the brothers making new music, or do you think their time has passed?

The Walking Dead Game is an Emotional Saga