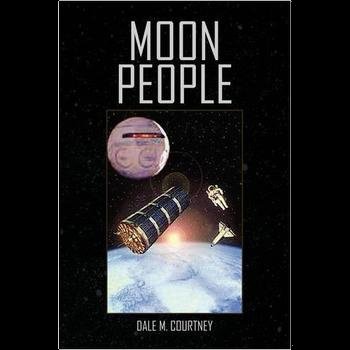 Moon People was written by Dale M. Courtney, a self-published author and father of three. The book is widely regarded as the saddest attempt at writing in history. How bad is it? We use this excerpt from the first chapter as an example:

“This story begins on a Beautiful sunny day in Daytona Beach Florida With a man by the name of David Braymer. A 45-year-old Single man that works at the local High school as a science teacher and astrology in the 12-grade level. Now he’s been here about 5 years and has become kind of partial to a young lady by the name of Cheral Baskel a local restaurant owner in Daytona Beach. At the moment Cheral’s preparing her restaurant for another Shuttle launch at the cape and everyone always gathers at her place because you can see the launch real good at her place. It’s also on the water and its real close to the cape and she really decks the place out.”

Let’s look at the original Moon People plot, shall we? According to The Huffington Post, the first Moon People follows the life of David Braymer, a school teacher turned astronaut who is caught up in a war between the Prowleens and the Arcons. We’re not sure what takes place between the prowling Prowleens and Arcons, but we know it’s a battle unlike any other. Allegedly, David Braymer saves the day (we think?).

It doesn’t end there. Courtney didn’t leave Cheral to bathe in the glory of a dyslexic name, no, Courtney wrote two sequels to Moon People! These hot follow-ups star none other than Courtney’s main protagonist, David Braymer. The second book in this amazing trilogy is titled Moon People 2: Mars Reborn, while the last book in this trilogy deserves special recognition as having the most original title in the history of writing – Moon People 3: Venus The Goddess Of Love.

The sexy sequel to Moon People takes place on Mars, where we assume the battle is repeated and David saves the day. We’re not sure whether Cheral survives the horrible Arcons of the first book, but her survival shouldn’t be based on surviving an age-old celestial war, it should be based on love, and love only. In the second Moon People masterpiece, Cheral is dropped from the cast of characters and Lieutenant Heather Courtney becomes David’s lifeless love interest. The final book in the Moon People trilogy ties up all the loose ends and (we think) takes place on Venus. Oh, how lovely!

There are many, many fans of Moon People. If you take a quick trip to Amazon’s website, you’d be surprised at how many fans Courtney amassed over the extent of the trilogy. “This is a book. And Also its a Good book, one to read. The auther who goes by the Name of Daryl M. Corteney really has a nack for Good science Fiction telling. Also the Story. Now I dont want too Give to much away. In my review, So your going to have to. Read, the Book you’re self. But serve ice it to Say, your going to Read some things here. That you really did’nt expect. I Took one star Off for being Short and Singlespaced. But hey,” read one of the comments. We know this is a book, what else could it possibly be? An instructional manual on how to “Moon People”? He only took “one star Off”? Omg! What will happen to the future of Moon People?

Another comment read, “Just read the opening couple of paragraphs and you will be sold on The MOON PEOPLE. This is a story about a guy who is a science teacher and astrology AND also he was a Government U.F.O. scientist. There is a love interest (Cheral). There is a shuttle launch coming up in only 2 days! There is something mysterious, because it’s Halloween. There have been Mysterious Events. All of that is revealed on PAGE ONE!! Take note, Melvile — you didnt even mention the whale in your story in like the first 600 pages. This guy put all that on the first page and also titeled his book “The Moon People” so you know where were going with this one. I wish there was a SIX STAR rating because! The Moon People is JSUT THAT GOOD! FIVE STARS! I cant wait for the Movie and also for the sequel, Moon People 2: Revenge of the Moon People!” Ah, shame, she wanted to give Moon People six stars, because Moon People is “JSUT THAT GOOD!” Aww, you shouldn’t have! We can’t wait for the movie either, because nothing spells box office success like a film that reveals everything in the first scene!

The final noteworthy comment read, “So but the book. This book the second Moon People 2 was better than Moon People because I was already excited and the first Moon People 1. So I read it. Moon People 2, and it was better at riveting me. So when after reading I gave it to my friend and He said to leave him alone. Because he’s reading Moon People 2, but he doesn’t have Moon People 1! So some parts of it might not make as much sense? But part’s that do are good.” Don’t you just love it when a book creates such a gorgeous relationship between two friends? So gorgeous, in fact, that they leave one another alone to finish ALL of the Moon People books out of order. Hey, do you know what’s also out of order? That feeling of Cheral’s eyes burning into us from her decked out restaurant real close to the cape.

Are you intrigued? It sounds like, whatever the plot may be, the book is written with bizarre grammar and capitalization. Maybe that’s part of the Halloween mystery? Will you pick it up to see what all the fuss is about, or are you willing to let this train wreck pass without looking?