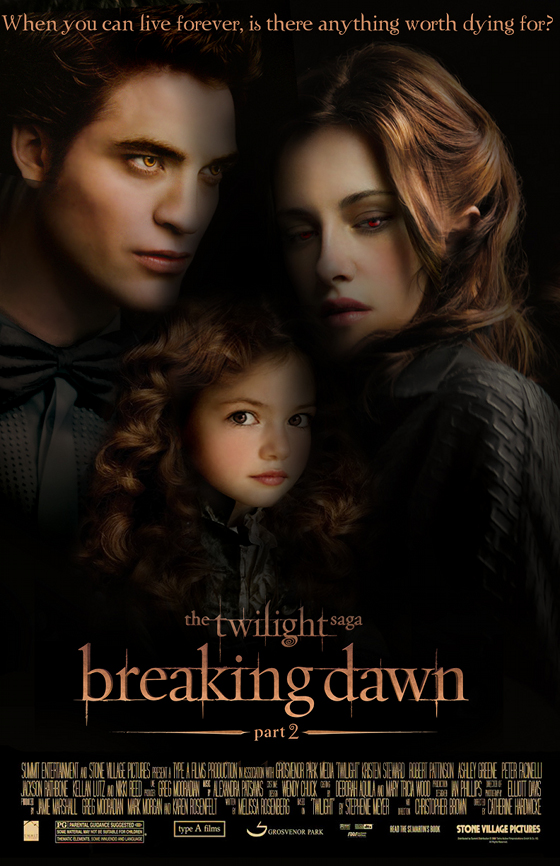 Because what else would you expect after a family of vampires defeats the vampire kings and saves their new baby? With the last installment of the Twilight Saga just weeks from premiering, fans are tithering about how the book will be interpreted. We’ll see Bella Swan (Kristen Stewart) as a vampire first time, meet Renesmee, her baby, and watch an epic showdown between Volturri, Cullens, werewolves, and wandering vampires. We’ll see Taylor Lautner shirtless, probably in the rain. The book doesn’t leave much to the imagination in all of that, but that isn’t stopping the movie’s director from adding a bit of glitz!

A couple weeks ago Kellan Lutz, who plays Emmet Cullen, revealed: “Every film has been building and building, and Bill really had a great idea with ending the series with Breaking Dawn Part 2, and just adding a little more flavor to parts of the book that weren’t there, but he elaborated more on. I think the fans are really going to enjoy it. They’re gonna love it, and Bill even told me that, stay for the credits — there’s a really special thing happening.”

I was thinking it would be Pirates of the Caribbean-esque, some sort of flash forward in time to show the Cullens in the future, but Nikki Reed (Rosalie Cullen) went even further! She told MTV News: ‘‘If it’s what I think it is, it’s really awesome. It was a surprise ”moment on set that was pretty incredible. That day, there were about 150 of us, and we all came together and surprised Bill, so I hope it’s that thing. It took a couple of practice runs [for us to learn it], and we had one drill sergeant who was in charge of gathering everyone. I got really into it. I was so into it that I wanted to be in the front row.”

What could it be but a dance? A huge mob flash dance, all of the cast together–friends dancing with enemies, enemies dancing with other enemies, laughing and smiling proudly now that their film saga has come to a close. It sounds like it will play after the credits. Will you stay and watch? You know movies with CGI have like, 10 minutes worth of credits. I guess you can always check your Facebook or wipe away the tears you weep at the end of an era… $10 says the dance moves will go viral.