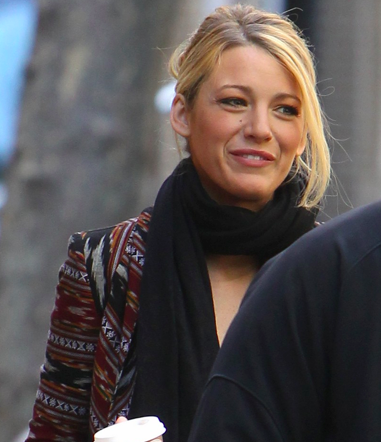 The stars of Gossip Girl were seen around set in New York City on Tuesday (October 16) including newlywed Blake Lively. Not only was Leighton Meester, Ed Westwick, Chace Crawford, and other regular stars spotted, but Taylor Momsen, who plays Jenny, was also seen on set. Ed Westwick recently shared a picture on Instagram that showed Taylor Momsen and Connor Paolo ( Eric van der Woodsen) in character. So a return of Eric and Jenny, whom have both been stated by their parents to be abroad, is to be expected in the final episodes of Gossip Girl’s sixth and final season.

One website, TVLine, also spilled that the end of the season will see a “core couple” reconciling. The report stated that they “don’t have any info about a Vespa, but can report that producers are planning a callback to the Season 2 episode ‘The Dark Night’ and will once again trap Dan (Badgley) and Serena (Lively) together in an elevator.”

With Blair (Lively) and Chuck (Westwick) back together, is a makeup between Serena and Lonely Boy too much like old times? And surely Georgina will try to stir up some trouble between the old couples.

We will also see appearances by Dorota, Juliet Sharp, Alexa Chung, and Penelope all before the series’ close, which will end with the tenth episode of the season on December 10 (which is also when we are supposed to discover the name and identity of Gossip Girl herself). What would you like to see happen as the series comes to a close? What are your predictions on the identity of Gossip Girl? Tune in December 10 to see the final fate of our favorite Upper Eastsiders.