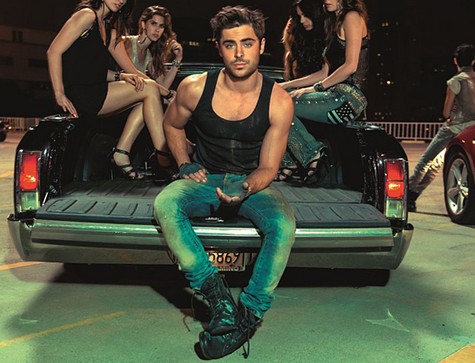 In the short, one minute advertisement, Efron rides a car, dances with a car (true), and climbs on a car. It’s all about the cars! No, not really, it’s about Efron’s denim. The commercial works on so many cool levels, but the part where Efron dances is one of the cheesiest, most awkward, most hackneyed moments in Efron’s career. We know this guy is all cheese when it comes to certain movies (High School Musical anyone?), but why should that cheese spread spread (yes, we gained enough XP to say spread twice) into the outer reaches of a cool ad for cool people? We always knew we shouldn’t trust a guy that challenges a car to a dance-off. What is this? “Transformers On Ice”? The end of the commercial sees Efron riding up in his pimped out ride and sweating like a serial killer in a police station. Why is he sweating? Shouldn’t the cool air from the fast driving blow away all that sweat? His hair is tousled and his lips are puckered, almost like he had a struggling elf for breakfast. Okay, we’re being hard on the guy. The commercial is really, really, really well directed, the soundtrack is killer, and Efron’s eyes might cause a baby boom in Minnesota.

You should watch the commercial and decide for yourself. Do you think it’s a cool marketing technique to use Efron to sell clothes? We would buy these clothes at the drop of that breakfast elf! What do you think? Check out the commercial below and let us know your thoughts in the comments below.

Will Zac Efron Win His Category At The Upcoming People’s Choice Awards?