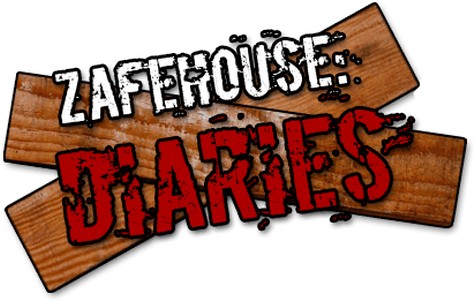 We’ve covered some of the best zombie games here on Celeb Teen Laundry, including the incomparable DayZ and the buggy, but excellent, Project Zomboid. The Mayans forgot to inform us that 2012 won’t be the end of the world, but that it would be the zombie apocalypse in gaming, television and film. Yes, our favourite genre of gaming just gained a lovely little cousin named Zafehouse: Diaries, a tactical zombie survivor game made by the independent gaming company Screwfly Studios.

The premise is absolutely genius. You are in control of several zombie apocalypse survivors. Each survivor has a defining personality, prejudice and history. You are in control of their relationships, their survival and their day-to-day existence, making game changing decisions as you move, barricade and fight the hordes of zombies. Every decision you make has a lasting and defining impact on how you approach the game. In our first play through we experienced crucial failure when the athlete in our group “murdered” one of the girls (he was prejudiced towards her). We sent him on scavenging missions to scope out new buildings on the map and bring back supplies to last us through the night, but unfortunately, he breached the hospital and was instantaneously killed by a horde of 16 zombies. The rest of our survivors dwindled and died from zombie bites and/or situational events. We lasted 2 days during the first play through.

We left the game and cleared our thoughts with the new season of The Walking Dead. Upon our return, we booted the game up and planned to take down as many zombies as possible, but unfortunately, during our second, third, fourth and fifth play through; we experienced game breaking bugs with the game’s refusal to advance time by more than one minute. Our visit to the forums explained our technical difficulties and a promise that these issues would be sorted out during the updated patch of the game. We believe you Screwfly Studios, because anyone genius enough to invent this awesome game shouldn’t allow it to suffer from these game breaking bugs.

We were dismayed that we couldn’t play further, but our dedication paid off during our sixth try, when we played for a full three hours in real-time without a single bug occurring. The experience was magnificent. The game’s universe is so finely tuned that one single mistake by the player could have long-lasting effects on the survivors. You’re able to spread rumours about the survivors in order to fix their broken relationships, but this can only be done once per game day and every rumour has major advantages and disadvantages, so you have to be extremely careful in choosing which rumour to spread. These relationships truly deepen the experience of the game, as you start to care for your survivors and plan ahead to save their relationships and lives. There are several situational occurrences during the game that further accentuate the experience. In our first situational trigger, one of our most hated survivors returned from scavenging supplies. He was bitten by a zombie and we had a choice to allow him to live and drain our resources, or kill him with a gunshot blow to the head. We chose the latter and our choice echoed throughout the rest of the game. For the first time ever in a strategic zombie game, every single survivor is worth more than the sum of their parts. The death of an athletic survivor will result in a group slow-down when zombies breach the barricades, while the death of a resourceful survivor will result in weak barricades and traps. The importance of each and every character in the game will make you think twice about your decisions, missions and survival. The ultimate mission in the game is to find notes that will lead you to be rescued by a helicopter at a specific destination. You won’t know where the destination is, what the radio frequency is, or when it will be, so this lovely little end game point makes the scavenging and the searching so much fun.

Zafehouse: Diaries allows the player to experience a deep and thoughtful tactical experience, without bogging down the player with incessant micro-management. However, there are quite a few issues with the game play that should be addressed, especially the bugs, the difficulty factor for new players and the sometimes clunky interface. The diary phase of the game is disturbed by a constant back and forth clicking when you play the game for the first few rounds – The survivors are mixed up every time you play, so it is annoyingly difficult to figure out who did what and to remember what makes them special during a specific round. This affects crucial decisions during the first day of the game. A notepad type interface in the game would have worked wonders, as you could have then been able to type out your plans, ideas and future decisions. The stone figures that represent each survivor on the map should have also been more definable. It’s irking to visually connect the icon with the survivor and then figure out a plan of action. If you’re playing a quick game and/or you’re in a hurry, there will be times when you might click the wrong survivor in the group and send them to their doom without even realizing it. This happened to us twice during the first play through of the game. The final, most important issue of the game lies in the repetition. There’s either too much, or too little, that happens during the game day. Yes, we understand boredom would set in during a zombie apocalypse, but several instances felt like repetitive clicking and odd micro-management, especially with the ABSOLUTE abundance of medical supplies, weapons and ammo. At one point, during the last play through, we had enough medical supplies, ammo and weapons to last us a century, cluttered together under the supplies tab on the map interface. It took us about half an hour to sort through all of these and figure out whether a baseball bat, a crowbar, or a hammer would do the job on our last scavenging mission. We eventually decided on the baseball bats, but we had enough ammo and shotguns to survive an attack from 21 zombies. The realism failed in the supplies aspect of the game, so a more intuitive interface and fewer weapons, ammo and medical supplies will make for an excellent game. What’s the point of dying in a hospital mission when you’re able to pick up antibiotics/pain killers from a dead zombie?

If you’re expecting a boom-boom-boom zombie game like Resident Evil or DayZ, this one isn’t for you. There’s quite a massive amount of reading and clicking to do, with several sentence structures that are slightly too ambiguous for new players, but if you’re able to overlook the errors, you’ll be left with a game that is one of the strongest zombie games to come along this year.

Kate Middleton Teaches Us How To Be Princesses — By Gardening

How to Handle the Loss of A Loved One