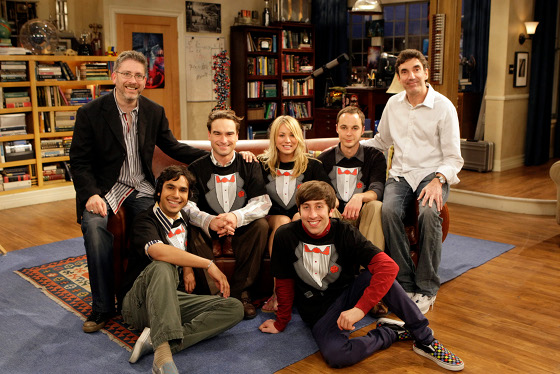 We love! There is little better than seeing the cast of your favorite sit com acting like total carefree fools. The Big Bang Theory may be about the lives of string theory theorists, rocket scientists, and a token actress/waitress, but that doesn’t mean they don’t know how to get down and have a good time. Kaley Cuoco, who plays Penny, bent heaven and earth to her will and organized a cast flash mob to the hit song Call Me Maybe by Carly Rae Jepsen. This morning, the singer took to her Facebook page and posted the video.

Hello to our awesome Big Bang fans! Finally the moment has come… All my dreams have come true… Yes, my dream to have a live, full out, dance routine for the world to see, has finally happened… I present to you… The Big Bang Theory Flash mob!(This literally was the best night of my entire life) Enjoy!!
Love Kaley!
Ps. A special thanks to the cast and bad-ass crew, for going all in, and making it a night to remember!
Pss. My sister Bri choreographed the entire routine! 🙂

CBS has only released a short version of the dance, which is started by the crew and totally wows the audience. I love the look on Kaley’s face the entire dance, but why wasn’t Sheldon (Jim Parsons) front and center? Perhaps he was just taking his character to a whole new level and standing by his previous statement, “Penny, while I subscribe to the “Many Worlds” theory which posits the existence of an infinite number of Sheldons in an infinite number of universes, I assure you that in none of them am I dancing.”

Flash mobs have been a part of life for a while now, and I don’t see them going anywhere. It seems like the perfect type of reality: one where strangers come together to dance and surprise people. Am I right? Have you ever performed in or seen a flash mob?