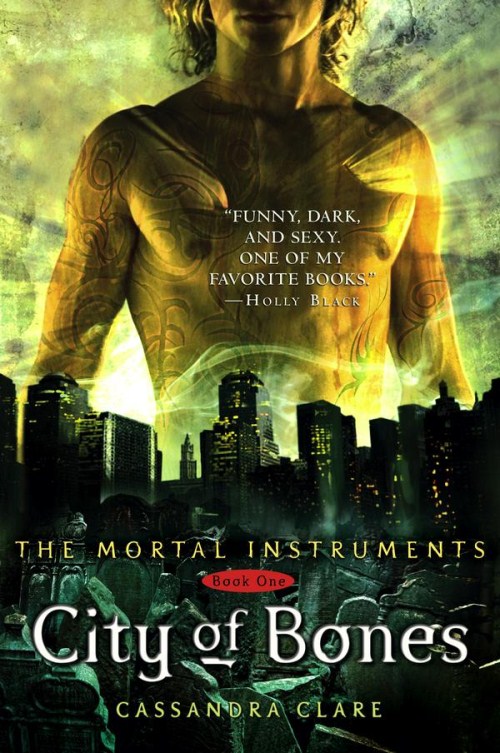 City of Bones was published in 2007 and is part of six of The Mortal Instruments series by Cassandra Clare. Set in New York City, the book tells the story of Clary Fray, a sixteen year old girl from Brooklyn who comes home one night to find that her mother kidnapped and her apartment infested with demons. The mysterious Jace Wayland, whom she met at a teen club, makes infuriating hints about a world she is part of but has never known. Together, Clary finds out about her family’s secret history and discovers her own latent powers that go above and beyond what anyone expects. She struggles to balance her new paranormal friends with Simon, her best friend from childhood who is hopelessly mortal. Will Clary be able to save her mother, or will a stirring dark force wipe out the world as she knows it?

Clary, a small and artistic girl, is forced to hit the ground running. Motivated by maternal love and a fierce dedication to justice, she doesn’t let her physical weakness (average strength by human standards) prevent her in a fight against a mysterious force who is rallying demons to his side. The book features the paranormal creatures we’ve grown to expect in YA literature: werewolves, vampires, faeries, warlocks, and demons are caught in a fight against magical relics, a secret language of runes, and divine fighters called Shadowhunters. The book is pretty heavy on the romance side, and the course of the series (which has not yet been completed) features several love triangles, betrayal, and a dash of incest (but don’t let that stop you from reading. I swear it all works out in the end!). Clary is a compelling character: she is ladled a pretty crappy adventure and instead of taking the Bella Swan route and curling into a ball of misery for six months, she fights and refuses to let her life pass by.

The book is full of hilarious one liners (basically everything Jace says is highlighter worthy), but the smart ass jokes don’t get in the way of the plot. Readers of paranormal fiction, fantasy, science fiction, and mythology will fall in love by the end of part one. The book is full of great quotes from classic literature and pop culture references. It’s hard to put down, so pick up the whole series and nestle in and put on a pot of tea.