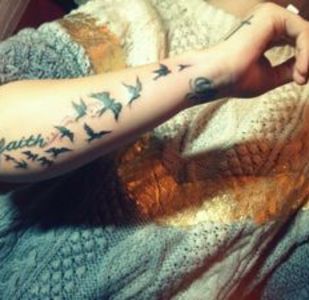 The leech faced judge on X-Factor USA, Demi Lovato, has gone and inked herself up for the 13th time. The world famous Kat Von D, tattoo artist extraordinaire, tattooed a flock of birds flying up the length of Lovato’s forearm. This was also an extension of the cursive “faith” tattoo she received in December of 2011. Lovato revealed the beautiful work of art on her twitter page and wrote, “Thank you so much @thekatvond for my new ink!! I think it’s beautiful and I love it!” Kat tweeted Lovato back and wrote, “So lovely tattooing the beautiful, @ddlovato today! Thank you, Demi!”

This, the singer’s 13th tattoo, adds to her collection of body art. She has the words “Stay Strong” on both of her wrists, a cross on her right hand, the words “rock n roll” on her fingers, and “you make me beautiful” on her ribs. According to Lovato, she “sees her tattoos as a connection with all her fans who supported her while she was in rehab for three months from November 2010.”

The X-Factor judge and singer received treatment at rehab for an eating disorder, self-mutilation, and a string of other personal issues. Since the singer’s stint in rehab, she has climbed the ladder of success and celebrity one step at a time. Her X-Factor appearance has been less than stellar, however, as she’s been wallowing in the pits of poor critique, pointless Simon Cowellisms, and horrible song choices and set designs for her contestants. After her heavily publicized rehab visit, the singer said, “I got ‘Stay’ and ‘Strong’ on my wrists, and these actually were really meaningful to me. My fans constantly said it the entire time I was in treatment.”

There’s no doubt in our minds that although Lovato is a horrible judge on X-Factor, her determination and courage have inspired millions of teenagers all over our self-obsessed planet.