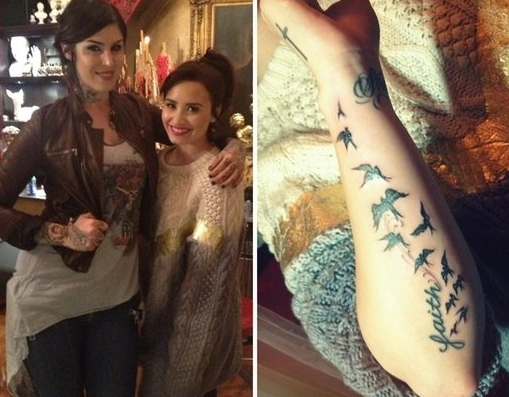 Demi Lovato has added to her rapidly-expanding collection of tattoos. The 20-year-old X-Factor judge’s thirteenth tattoo is a flock of birds, paired with the word ‘Faith’ on her right forearm. The singer got the ink done by famed tattoo artist Kat Von D.

Lovato tweeted a picture of her new ink on Sunday (November 25) with the caption “Thank you so much @thekatvond for my new ink!! I think it’s beautiful and I love it!!”

Lovato decided to get the new tattoo despite what she said on LIVE! With Kelly and Michael in September. She expressed her regrets for already having 12 tattoos at age twenty. She even said that the tattoo of her friend’s lip, which is inked on the inside of her left forearm, was a  “spur of the moment, stupid decision.”

When asked about if she has considered removing her tattoos, the songstress , “I’ve thought about it before because, you know, when I get older I don’t know if I want to have ‘rock and roll’ on my middle finger.” She added, “But I’m young and I can rock it now. When I get older, I can worry about it later.”

It looks like Demi will have one more tattoo to worry about in her old age. What do you think of Lovato’s new tat?