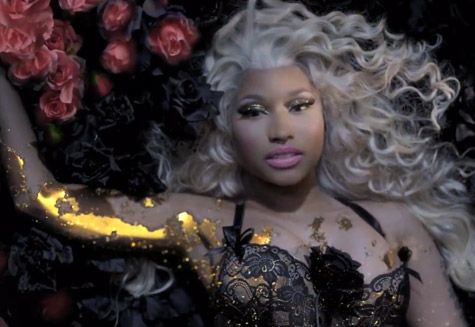 Nicki Minaj‘s debut fragrance commercial has been released and it’s pretty damn cool. As you may know, over the summer Nicki debuted her first fragrance, titled Pink Friday, so it only made sense for her to film an advert to promote the product. The singer can be seen in the video laying on black roses, moving around a little, before cutting her finger (note, her blood is pink) — next thing you know the entire surrounding is pink and Minaj’s eyes turn purple, while she creepily smiles in the camera. Is that supposed to be Roman?

Though we’re not really feelin’ the fragrance commercial, this woman knows how to make money. Along with her perfume deal, the rapper signed a reality show deal with E!, signed a $12 million deal to judge on American Idol, gearing to release a re-up version of Pink Friday this month and is currently on tour to support the record in Europe. Have to give props to her, considering she’s the only rap female to be THIS successful, but the commercial sucks.

In other news, Nicki wants to get involved with another reality show deal when she launches her fashion line next year but these plans are still in early stages, the singer told Billboard: “I’ll see how overwhelming it is… if I feel like it’s too personal, people discussing too much, I won’t do it.” Speaking of her current three-part reality show – wich ends tonight on E!.

Minaj continued: “It’s about overcoming everything when you’re trying to get something done and how hard it is to balance everything.” She continued: “I was beginning American Idol, preparing the tour, doing video shoots,” before joking: “It should be called Multi-Tasking At Its Finest”.

Justin Bieber And Selena Gomez Had A Sleepover Last Night, Are They Back Together?