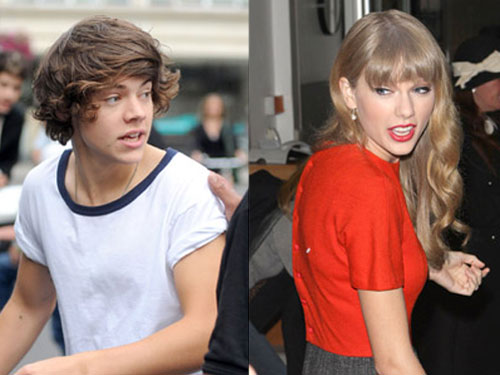 Wow!! Taylor Swift is such a little flirt, isn’t she? Ha. She doesn’t waste time to move on to the next. According to Mario Lopez, Taylor is REALLY dating One Direction’s Harry Styles. The two who had been linked for a couple of weeks, following the news that Conor Kennedy decided to end his relationship to the singer, are starting to come out in public after being spotted holding hands backstage on X Factor last week.

The funny thing is that if One Direction had performed on the show last week, we could have just said that it was a coincidence that they were both there together and supposedly held hands as a joke, but 1D didn’t perform, in fact when host Mario Lopez asked Styles what he was doing at the show, Harry just pointed at Swift before she went on stage which made it clear as to what he was trying to tell Lopez… they’re dating!

At a recent interview the host discussed the two during a radio interview where he said: “Taylor Swift was the special guest performer, and [here’s] a little inside scoop for you. During rehearsals, Harry from One Direction came and slapped me on the back, and said, ‘Hey, Mario, how ya doing?’ And I said, ‘What are you doing here?’ And he sort of [pointed] toward Taylor.”