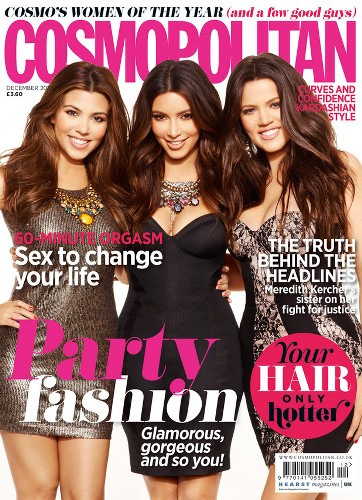 The Kardashians are taking over another magazine and this time it’s December’s issue of ‘Cosmopolitan’. The three sisters dressed up in their Kardashian Kollection line as they shot pictures for the cover of the mag before sitting down to talk about each other’s personality, pain and struggles. While Kim and Kourtney are currently filming their spinoff show in Miami, Khloe has been busy hosting The X Factor back in Los Angeles – the youngster of the trio chats about having to deal with critics who say she’s too big and doesn’t look nothing like Kourtney or Kim.

“My weight fluctuates, like any normal girl, and I have times when I feel insecure,” she said. “So if I come under scrutiny at one of those times, then I might get really down on myself. But the next day, I might be like, ‘Oh, f**k off, I’m so much better than that.’ I have moments of weakness, but mostly I brush the criticism off… Who cares if I’m not a size zero? I don’t want to be. I love my body.”

Kourtney continued: “I truly want the best for my sisters from the bottom of my heart. When they feel pain, I feel pain. Their struggles are my struggles. And their joy is my joy. Nothing anyone says can change that. Every person is different. That’s what makes the world go round,” while Kim continued: “I want to teach my future daughters that confidence is everything. I don’t mean cockiness; just being sure of yourself.”

Kourt and Kim were spotted at the airport in Miami yesterday, making their way over to London – where Khloe will join them on Friday – as their Kardashian Kollection launches in London on Saturday. Say what you want about them, but this family know how to make money. Hard working sisters who haven’t let fame get to their head (except Kim… maybe). Ha

‘Yes, I Definitely Will’: Britney Spears Confirms She Will Be Back For X Factor’s Third Season