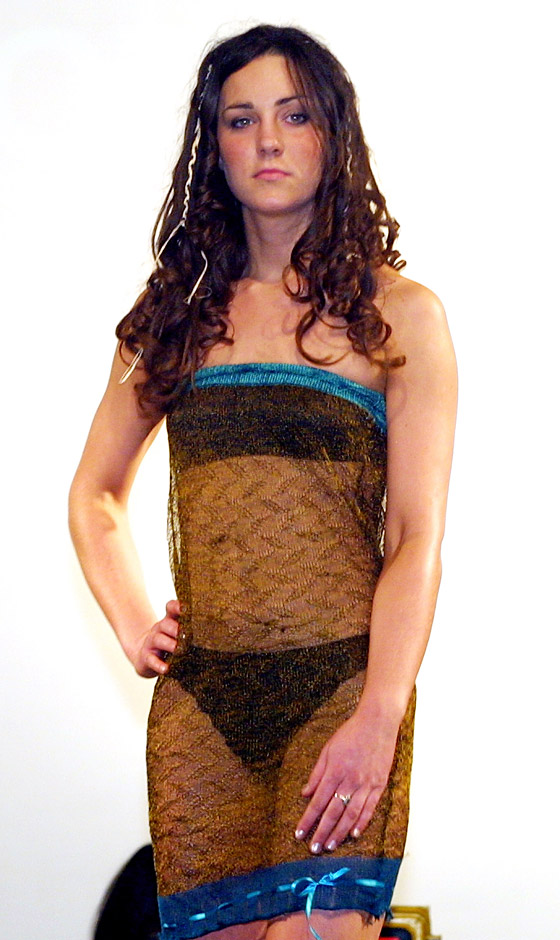 We all have skeletons in the closet, but most of us aren’t set to become the future Queen of England! Kate Middleton, who has charmed the world with her shy smile, lustrous hair, killer bod, and “rags to riches” story, has accidentally released a statement about a scandalous charity event she participated in while at St Andrews University in Edinburgh. While a student, Kate volunteered to model in a charity fashion show, where she chose to wear a sheer skirt–but she wore it as a dress, with bra and panties underneath. Not that thrilling, unless you fall in love with a prince. Then every TV movie will turn the playful idea into sheer lingerie with a riding crop.

It’s rumored that Prince William first noticed Kate during the fashion show, and he reportedly leaned over to a friend and yelled, “she’s hot!” over the music. Not very romantic, but there you have it. Of course, the couple began dating, traveled, broke it off, reunited, and so on. It’s all history now. But at a gala held to celebrate the university’s 600th anniversary (how amazing is that? Nothing in the US is that old!), Kate ended up speaking with a current female student, to whom she said, “I hope you weren’t involved in the fashion show, you never know what you are going to be asked to wear!”

How hilarious is that? She’s always so meek and polite during interviews (as well she should be! She’s a diplomat, not a trashy tabloid celeb like the Kardashians!), and it’s so fun to see some of her personality come out! Besides, how fully British does that sound? I can imagine Maggie Smith or Angela Lansubury, in a high collared dress, saying too loudly, “I do hope you weren’t involved!” Above is the picture from the fashion show. What do you think? Sexy and news worthy, or a young woman having fun at school, raising money for charity (and maybe a few eyebrows)?

Kate Middleton New Haircut Photos, Love It Or Hate It? Read Our Hair Tips To Avoid A…