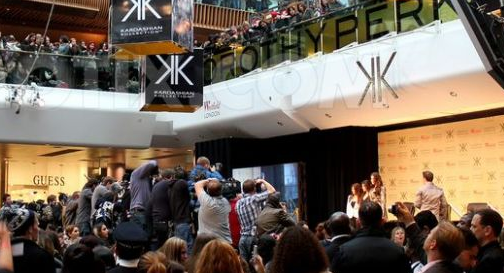 If you thought America was crazy for the Kardashians, London girls take it to a whole new level. As most of you may know, Kim, Kourtney and Khloe Kardashian are in London as they launch their Kardashian Kollection line overseas with company Dorothy Perkins. So when the trio prepared themselves for a meet & greet with their loyal fans who had camped outside for 13 hours to get a good look at the glamour girls, it worried security officers as more and more girls arrived at the entrance doors, hoping they would get in despite there only being space for 500 people.

The Westfield shopping centre gave out wristbands to 500 lucky fans – which allowed you access inside the building – which angered the rest of the thousands of fans who had also been waiting in line for hours, but there was nothing that could be done about it. The shopping centre’s security staff were worried for everyone safety when a handful of people started getting crushed, dehydrated and even fainted upon seeing the Kardashians. It was definitely a crazy event.

Westfield had tweeted in the early hours before the event took place: “Due to high demand of high queuing for today’s event, Westfield security actioned a safety contingency plan to allow overnight queuing. Westfield has a duty of care to look after our guests and the decision was made to de-mark the first 500 people for safety reasons.”

And what made things worse was when Khloe had tweeted to her fans that they should not listen to Westfield’s security, adding that they will try and see as many of her “dolls” as possible. She tweeted: “Sorry babies! I’ll see what went wrong.” She then added: “Do NOT listen to WestFields tweets!!!! Kourt Kim and I will see as many dolls as we can! We love our dolls!!!”

A little later on in the day, Khloe then took to her blog to address the hectic day: “We can’t believe how many incredible fans are waiting outside (several thousand!) In order to keep everyone safe, Westfield had to action a contingency plan for those who stood in line over night and made the decision to wristband the first 500 people because we didn’t want it to become too intense for everyone.”