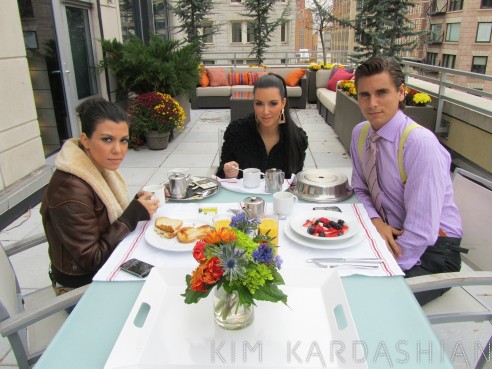 Our reaction upon hearing that Kourtney was finally set to walk down the aisle was: “Yipeeeeeee,” but now we’re hearing that she wont be getting married after all — at least not any time soon. Last week, Star magazine reported that Scott Disick had proposed to his girlfriend of six years, which seemed to have been the right time, considering that they have two kids together, their relationship seems to be very strong and Scott has been laying off the booze.

However, whilst catching a flight at a Miami airport, sister Kim Kardashian broke the news that Kourt was not engaged and that the stories that were printed in the magazine were untrue. Sometimes we really do hate falling for what the tabloid magazines say. Ha. A TMZ reporter popped the question to Kim on what she made of the engagement, when she didn’t hesitate to reply, saying: “She’s not [engaged]. It’s not true.”

So, this leads us to question why Kourt does not want to marry Scott? As seen on the show, Disick wants to marry Kardashian but she feels that a relationship is the same as marriage and therefore doesn’t feel like she needs to rush into anything. It will happen when it happens, she says. Here’s what she had to say to her mother Kris when she asked why she’s not getting hitched:

Life of Pi Will Be Released Tomorrow – Don’t Miss This Masterpiece!