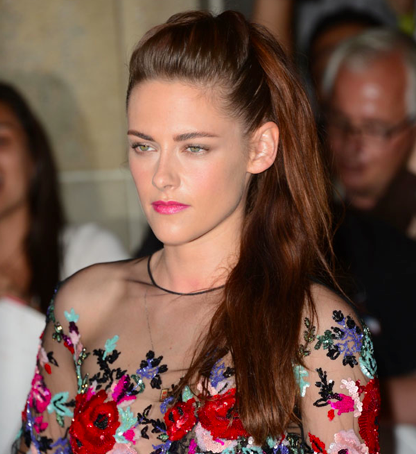 Kristen Stewart, looking stunning in a Balenciaga gown, rocked the red carpet at her On The Road premiere. Though she walked the carpet alone, and attended the event solo, the actress was joined by her again-boyfriend Robert Pattinson.

While the screening took place at the Grauman’s Chinese Theater, the afterparty was held at the Roosevelt Hotel. Though the Twilight costars was spotted exchanging light touches and laughter, Stewart spent the majority of the night with On The Road costar Amy Adams.

Once Adams left, Stewart and Pattinson reconnected, before leaving together around 1 a.m. Both seemed in good spirits and happy with each other. This is one of the first public outings for the couple since they got back together after Stewart cheated on Rob with her Snow White and the Huntsman director.

While the couple has since done on-screen interviews together, neither will discuss the status of their relationship. When asked to comment on the affair, Pattinson said, “I’ve never been interested in trying to sell my personal life and that’s really the only reason people bring it up. The reason you go on to TV is to promote movies. That’s the only way to do it.”

However, a source revealed that “Rob usually sleeps over at Kristen’s new home in Los Feliz, rather than the other way around.” The couple has reportedly planned a trip to Australia for later this month, and if things go well, they might move back in together. Only time will tell with the secretive couple.

In the meantime, you can look forward to the final installment in the Twilight saga, Breaking Dawn Part Two out November 16.