Life of Pi Will Be Released Tomorrow – Don’t Miss This Masterpiece! 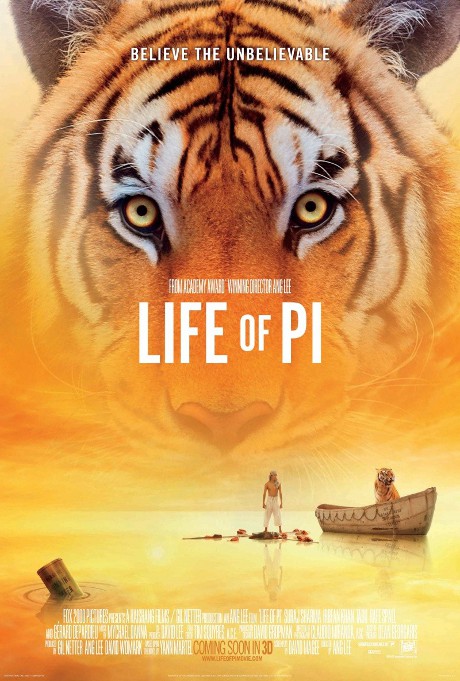 Tomorrow is not only Black Friday; it’s also the release of one of the most magnificent new films of the year. The film, Life of Pi, is based on Yann Martel’s best-selling novel, and will cross all boundaries, racial divides, political lines, and personal orientations. The 3D masterpiece is a must-watch, as it is infused with humanity’s polarizing relationship with nature and animals. The social commentary is also a welcome reprieve from the usual holiday season fare, and will make you think twice about dismissing an animal as “just another creature.”

This graceful film, directed by Ang Lee (Brokeback Mountain), deals with an epic adventure of self-discovery, friendship, and man’s reconnection with nature. According to IMDB, ““[The film,] based on the best-selling novel by Yann Martel, is a magical adventure story centering on Pi Patel, the precocious son of a zoo keeper. Dwellers in Pondicherry, India, the family decides to move to Canada, hitching a ride on a huge freighter. After a shipwreck, Pi finds himself adrift in the Pacific Ocean on a 26-foot lifeboat with a zebra, a hyena, an orangutan and a 450-pound Bengal tiger named Richard Parker, all fighting for survival.”

The obvious tear-jerker stars the significant newcomer Suraj Sharma, who went from being a regular teenager who grew up in New Delhi to starring in what has been described as “the new Avatar”. The film was almost never made, but the director Ang Lee took it upon himself to have his vision portrayed on the silver screen. Life of Pi had to take a winding 10-year journey to reach its destination, and the world will be different because of it.

Famed film critic, Roger Ebert, gave the film four out of five stars and called it “a miraculous achievement of storytelling and a landmark of visual mastery.” Another critic, Peter Travers at Rolling Stone Magazine, said of the film, “Like Hugo, from Martin Scorsese, Life of Pi puts 3D in the hands of a worldclass film artist. [Ang] Lee uses 3D with the delicacy and lyricism of a poet. You don’t just watch this movie, you live it.” The film has also been touted as the frontrunner in the race to the annual Academy Awards, and also received a smattering of awards, praise, and hype.

Don’t be a fader, so grab a group of your best friends, stroke your cat, kiss your dog, and head to the cinema. You’re going to be in the mall anyway for Black Friday, so why not take a break and enjoy the greatest cinematic release of the year.

Five Questions That Will Change Your Life