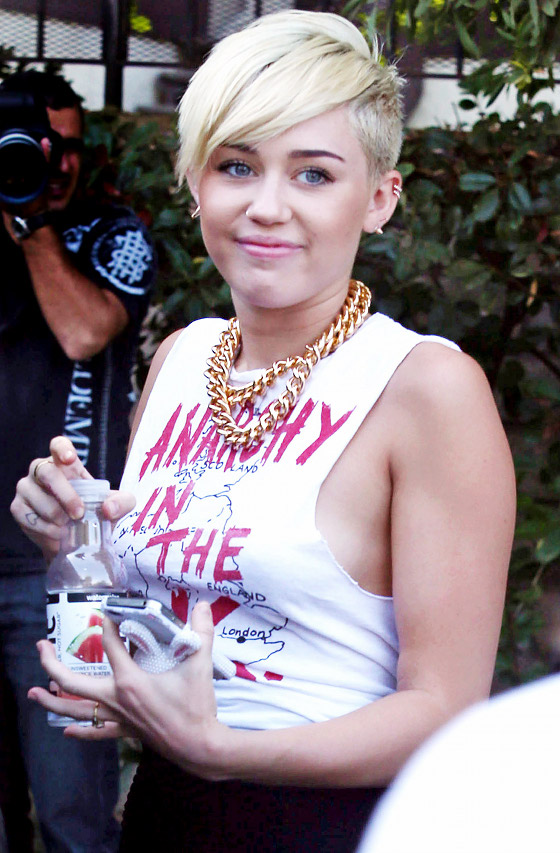 Rumors and speculation have been swirling through the internet ever since Miley Cyrus first showed off her huge rock from fiance and boyfriend of three years Liam Hemsworth. The 19-year-old actress, who is currently guest starring on Two and a Half Men and finishing up her long-overdue album, gushed to Ellen Degeneres today about her wedding plans, explaining why it will be worth the wait, and why we shouldn’t expect to see her star in three separate ceremonies, as was rumored.

“There’s some rumour going around that I’m having like 47 weddings – I’m not. I’m having one wedding. That’s my day and whatever I want on that day, it will be about me and that moment, that look of love. That’s the one day that that movie crap is real, that romance. That look is the time that you get that. I’ve been to probably 10, 20 weddings and I’ve seen that look probably five, six times. It’s rare that people just stop to really look a person in the eye and know that this is your life together. It’s important.”

It is great to see a celeb who isn’t sprinting down the aisle. Love her or hate her, she seems to be putting a lot of thought into the wedding, and time can only do her good! By taking time to plan and get to know Liam even more, she has the chance to either build on a strong and healthy relationship, or recognize fatal flaws and duck out before it turns into a sticky legal battle. I think they’re in it for the long run though–they have five shelter dogs, and if that doesn’t say true love, I don’t know what does!

Miley seems really happy that she has decided to hold off on the wedding until her work schedule allows her to really slow down and appreciate it. She already promised fans on twitter that she’d have a new album out long before her wedding! She told Ellen, “I’m so focused on my recording that I don’t want to be in between touring and trying to plan all that. I didn’t really realise until I got a wedding planning book what you have to decide on. Like, I don’t care what colour the napkins are, to be honest! I really don’t care. So it’s a lot of weird detail – I don’t want to be doing too much and be crazy and forget about the moment of it all.”

I think Miley looks quite healthy and happy, and despite the haters, seems to be settling in to who she is as a person. And of course, I love to see her supporting PETA so openly on her Twitter. She told Ellen that she one day hopes to own a huge property so she can continue adopting animals. What do you think of the ex-Disney princess? Too young to wed or just head over heels in love?