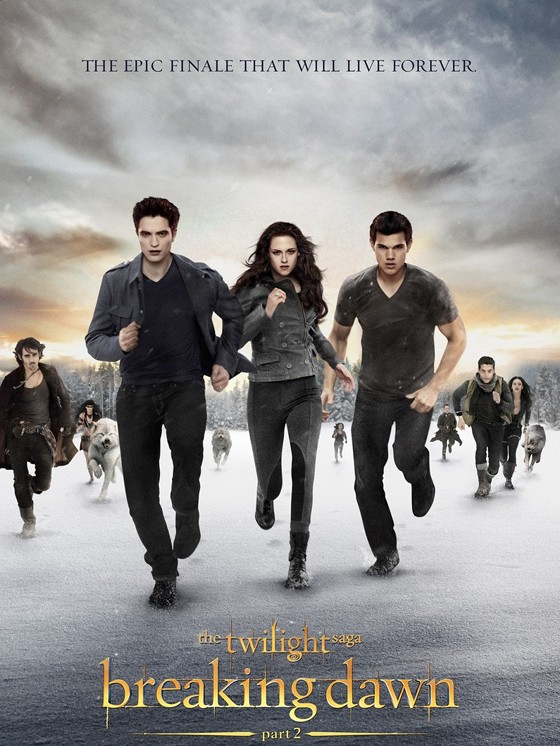 More than four years after the novel was published, fans finally got to see the epic finale to the Twilight Saga on screen. Though I’ve read all the books, I’ve always been a Twilight skeptic. I live in between Forks and Seattle, WA and was first quite affronted by Stephenie Meyer‘s use of my home state. Sure, it’s beautiful and misty here, but I swear there are no werewolves. The Twilight fans that started pouring in were hard to handle! But when I saw the final movie last night I was, somehow, in a theatre filled with people who hadn’t read the books! I thought it was a prerequisite, but I was wrong. If you haven’t seen it yet or don’t want spoilers, than stop reading now!

The movie starts with Bella waking as a vampire. I thought the scene was handled pretty well, even though it differed from the book. She hurts Edward a bit with her strength, and they go to hunt. As in the first few films, the running vampire segments are really cheesy, with wooshing noises and, for Bella, slow motion bits as she sees air particles and hears distant leaves fall. I was actually getting quite hopefull–against all odds, Kristen Stewart managed to up her acting a bit for this film (which is odd, because it was filmed at the same time as Breaking Dawn Part 1! I think it was her trying-to-act-like-a-vampire that helped her improve.) but the old sighing K Stew that we’ve all grown to love came back a bit. In one scene, she yells at Jacob (Taylor Lautner) after learning he’s imprinted, “You nicknamed my baby after the lochness monster?!” and it’s a bit forced and awkward to watch.

This is the shortest movie of all, ending in just under two hours. It feels short too. I see the film divided into three distinct segments: Happy vampire family, meeting foreign vampires, and in the clearing. Bella and Edward’s first vampire sex-athon happens in section one, and despite the interviews Robert Pattinson and Kristen have given about it, I thought they pulled it off rather well. Rob’s explained that the director wanted them to make bizarre faces, and that it was really weird to film, but the sequence is a bunch of short clips–Bella’s hand closing on a sheet, bits of kissing, legs, and so on. No thrusting problems in this movie! So I give kudos to whoever edited that scene, because it works well.

I was disappointed with the way characters were used in this film. I felt that the Cullen family was sort of put on the back burner, and not at all developed or used. Rosalie (Nikki Reed) especially–she’s supposed to be super protective of Renesme, but in this film she has weird hair and is really nice to everyone, even Jacob. The half-vampire baby is really freaking looking. They used a robot baby and CG’d the actresses face onto it. The people in my theatre kept shouting that the baby was beautiful. I thought it was a sloppy job and looked like a devil baby.

One of the coolest things about the Breaking Dawn novel is the chance to meet a whole bunch of eclectic vampire covens. I think their introduction serves two purposes to the plot: the first is obvious, they help the Cullens against the Volturri. But I think they also demonstrate to the wolf pack and to Bella that despite their questionable diet, vampires can be loyal and recognize right from wrong. Stephenie left herself open for more books, including a future fight to overthrow the Volturri. The scenes with foreign vampires felt very short, though they technically stuck to the book well. We see the various gifts and Bella is diagnosed as a shield. More Quileutes turn into werewolves, and no one in Forks is eaten.

The scene in the clearing felt like half the movie. It goes exactly the way the book instructs–despite the fight clips you’ve seen in commercials. The guy who plays Aro, Michael Sheen, is phenomonal. His twisted joy and insanity is totally apparent, and his fellow Volturri are obviously disgusted with his behavior. He accepts the truth about Renesme but, true to form, loudly questions her future behavior and whether or not she can be trusted. Bella uses her shield to protect the Cullens and their witnesses, and at the last moment Alice and Jasper come back. Alice testifies to Aro about her half-vampire witness, but Aro is still doubtful. A huge fight breaks out and Jacob begins running away with Renesme. Carlisle, Jasper, Seth, and some of their witnesses die, along with Volturri members Jane, Alec, and Caius. Benjamin, who has earth power, opens a crater and vampires and wolves fall in to it. Bella and Edward capture Aro and kill him, and the scene changes. The entire battle is a vision that Alice shows to Aro to prevent him from fighting. Terrified of his own death, Aro exonerates the Cullens and the Volturri leave.

At home, the Cullens bid farewell to their new vampire friends. The Denali vampires are mourning the loss of Irina, but Garrett joins Kate. No mention is made of vegetarianism. Also, Garrett is played by Lee Pace of Pushing Daisies, and let me tell you, he cleans up well. Bella and Edward are relieved to know more about Renesme’s lifespan, and Alice shows Edward a vision of the future, in which Renesme. In their flowered meadown, Bella takes down her shield and shows Edward a short collection of her memories with him. The final image is the last page of the book. All the words disappear from the page, except “forever.”

All in all, the film did what it needed to do. It was true to the book, told the story, and wrapped up well. But I felt that it was quite rushed. Why split a book in to two films only to make one really short? I think the beauty is in the details, and we missed out on a lot of little pieces, like the J Jenks scenes. As for the flash mob, you’ll have to wait to see it in the DVD extras. My biggest wish is that the Director  Bill Condon had slowed things down a bit and given everyone a little more screen time to develop more as a character. Bella’s fight with Emmett (Kellan Lutz) as a strong vampire is weirdly placed, and we don’t see him upset after. Little things like that, to me, brought the movie down. And what happened to the big surprise ending? I guess it wasn’t surprise so much as a twist, which means that huge fight sequence was it. I hated it, to be perfectly honest. I knew it was fake, and just felt minutes of my life ticking by while I waited for the film to start moving forward!

Bottom Line: Better acting, funny characters, relatively true to book, and you know you’re going to see it no matter what.

Justin Bieber And Selena Gomez Had A Sleepover Last Night, Are They Back Together?