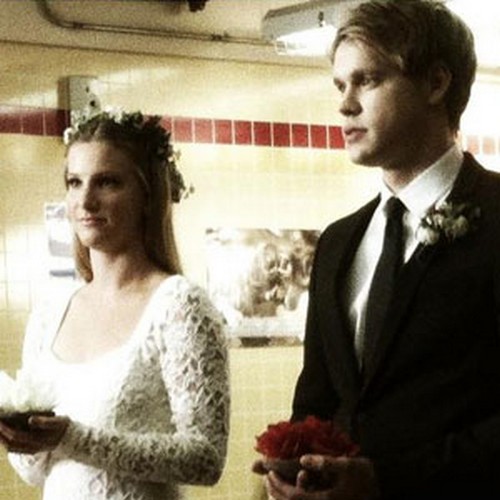 Glee’s almost wedding stints have caused many fans of the show to disregard any wedding spoilers posted by fans/producers. However, a latest image posted by Glee creator Ryan Murphy caught our attention due to its out-of-sync and out-of-character nature.

The recently posted image features Sam (Chord Overstreet) and Brittany (Heather Morris) in a traditional wedding ceremony. This would have been perfectly normal if it were not for the fact that Brittany only recently broke up with Santana (Naya Rivera) during an emotionally charged pre-season-break episode. There have been slight nudges toward a full-blown Brittany/Sam relationship over the small early season story arc, so we wouldn’t put it past the show to surprise us with a late season wedding. We have, after all, been waiting for a wedding for the past 4 seasons, including the much anticipated Emma/Will wedding, and the now defunct Rachel/Finn wedding. There could be an assortment of reasons as to why it was posted by Murphy, but we’re placing our bets on a dream sequence in the black void of Brittany’s mind, which is the most logical conclusion we could draw from the mystery image.

Glee’s latest season has been polarizing among fans of the show. Several critics of the musical have pointed out the split-down-the-middle segregation of Gleeverses – Ohio versus New York – as one of the defining factors for the dwindling viewership figures. The show returns this Thursday after an extremely arduous early season break. The return will also see Glee Project winner Blake Jenner make his appearance – a much anticipated and discussed event among die-hard Gleeks.

Do you think this image was a sign of things to come? Or do you think it was a cliffhanger image to tease fans of the show? Let us know your thoughts in the comments below and head over to our sister site, Celeb Dirty Laundry, for all of your Glee news, reviews, recaps, and spoilers.