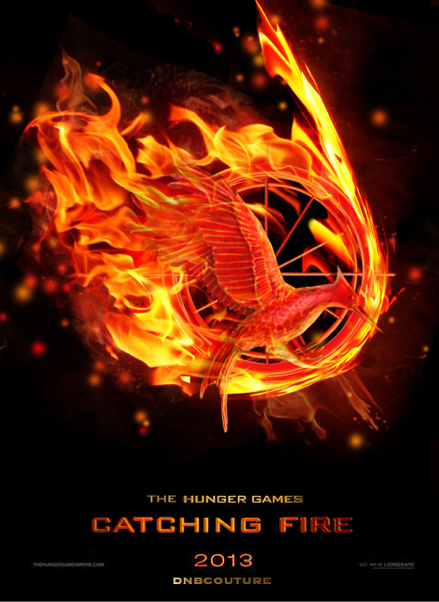 Anticipation for the second Hunger Games installment, The Hunger Games: Catching Fire, is continuing to build now that filming has wrapped in Atlanta, Ga. A new Motion Poster for the film has been released, looking similar to that seen in the first film.

In the second film of the series:

Katniss Everdeen (Jennifer Lawrence) has returned home safe after winning the 74th Annual Hunger Games along with fellow tribute Peeta Mellark (Josh Hutcherson). Winning means that they must turn around and leave their family and close friends, embarking on a “Victor’s Tour” of the districts. Along the way Katniss senses that a rebellion is simmering, but the Capitol is still very much in control as President Snow prepares the 75th Annual Hunger Games (The Quarter Quell) – a competition that could change Panem forever.

Stars Jennifer Lawrence and Josh Hutchinson were seen arriving at LAX airport on Sunday (Octoboer 18) in Los Angeles. Josh was then seen riding around Sherman Oaks, Calif. on his motercycle Monday. You can catch the 22-year-old on the Late Show with David Letterman tonight (November 20) promoting his newest film, Red Dawn.

When asked about Sam Claflin starring in the second film as Finnick Odair, Lawrence revealed that Hutchinson and him had a got along well. She joked, “They are in love. It’s a full-blown bromance and it’s really bromantic and adorable. It’s really cute. It’s annoying, but it’s cute.”

The Hunger Games: Catching Fire will be released in a little over one year, on November 22, 2013.