One Direction Chose Johnny Depp to Temporarily Be Part of Their Group – Or Was It The Other Way Around? 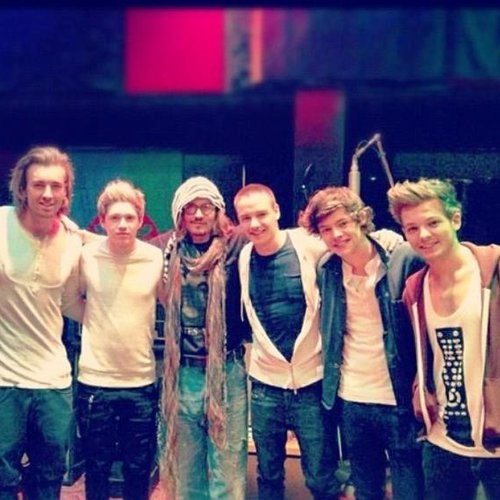 I scream, you scream, we all scream for One Direction. No, seriously, we all do. They’re the type of guys you want to root for, the type you want to take home to your mom. They just seem to work – both as a group and as single personalities. They’re a perfect storm of superstar good looks, catchy music, and relatable lyrics. And since Justin Bieber turned into a horror overnight, we have a sneaky suspicion that the Beliebers will defect from their cult and join the One Directioners. You know who is also a fan of 1D? Johnny Depp. Yes, Captain Jack Sparrow is now an honorary sixth member of the UK-born quintet.

The mega-hit pop star dudes were invited by Johnny Depp to visit his house and meet his daughter Lily-Rose, who is a borderline stalker fan of the band. The young stars not only visited Depp, but also had the insane honor to have a jamming session with him. A source told UK based newspaper The Sun, “Johnny found out One Direction were in town and, after making a few calls, they came round to his studio. He brought out his piano and guitars for the boys to test and they had a little jam session. Lily-Rose just watched with her blushing mates while her dad temporarily joined the world’s biggest boy-band.”

Okay, hold on to your hormones for a second girls, and imagine how cool it would be to have the biggest pop group in the industry swing over to your house and jam with your dad on a guitar. Yes, we admit, it was Johnny Depp, and visiting Johnny Depp must be quite the privilege on its own, but imagine how chuffed Lily-Rose must have been when she opened the door and One Direction greeted her.

What would you pay to have One Direction show up at your door? Would you sell your soul, One Directioner? Let us know your thoughts in the comments below.