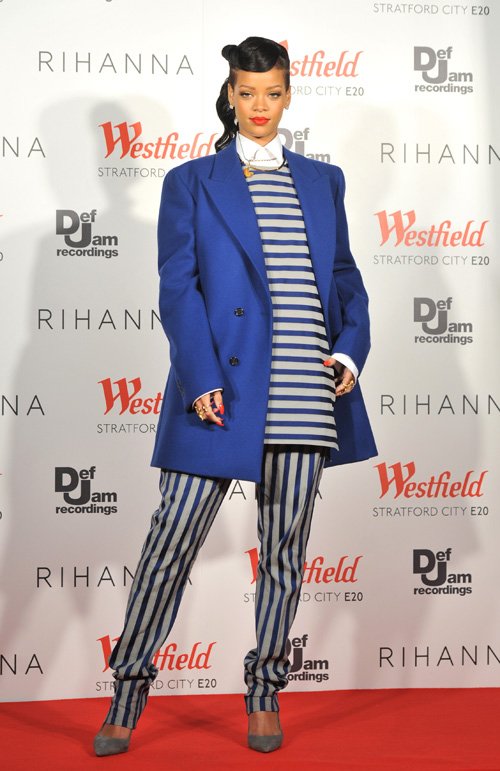 C-c-c-crazy Rih Rih. The Bajan singer continues to annoy fans overseas as she constantly arrives late for her performances. Now, this is nothing new. Rihanna has been arriving at events fashionably late because we’re going to assume that she thinks it’s acceptable to behave like this, well her RihannaNavy clearly isn’t happy about this. Rih was scheduled to perform at Westfield Stratford, before turning on the Christmas lights at the shopping centre, but staff say 20,000 people started to get impatient when the singer took more than an hour to start her performance.

Want to know what the worst thing about the whole thing was? She only performed ONE song… yes, ONE song – and according to people who were present at the shopping centre, she didn’t even bother finishing the song but still received the $1 million she was promised to receive. It was rumored that organizers were willing to pay her up to $5 million to sing a couple of songs, but it looks like she preferred to take the $1 million and just sing one song instead.

In other news, Rihanna remains to top the album charts later this week with sales of 250,000, which would be her biggest opening week sales since Good Girl Gone Bad. Talk That Talk, Loud and Rated R averaged at around 200,000 in first week sales so Rih should be happy to hear that people are still buying her music, despite her constant punctuality being absolutely terrible. Note, we can back this up when we saw her live — she was THREE hours late.

Speaking of the new record, the singer explained: “I named my album Unapologetic because there is only one truth, and you can’t apologize for that. It’s honest. I’m always evolving of course. I think the only motto I have is to be true to myself.”