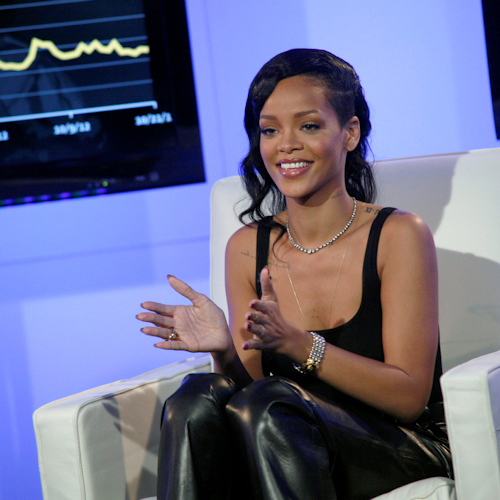 She is a good girl after all. Rihanna held a listening party in New York for her new album, Unapologetic, yesterday where anyone who was willing to donate anything from blankets, cash and cleaning equipments was given access to the lounge party. The singer, who releases her forthcoming album next week, told Andy Cohen that she was devastated upon hearing what had happened to the city she spends so much time in, last week.

The Bajan singer had good news to share when she made the first announcement of having fans donate items the disaster that happened, but it only got better when Rihanna added that she would donate $100,000 of her own money to the Food Band in New York, in hopes that it will help to provide warm food for the people who were affected by Sandy last week (where some citizens even lost their homes due to the strong weather conditions).

During a Facebook Live chat with Bravo’s Andy Cohen, the Diamonds singer explained: “It’s really difficult to see something so tragic going on and not be able to do anything about it. There’s nothing you can control, you know? It’s mother nature and it gets worse… and you just keep holding your breath. It’s really sad what happened here.

“But tomorrow, I will be donating $100,000 to the Food Bank for New York City. We’re also doing a listening party at the 40/40 [club] and everybody is asked to donate some blankets, bleach, brooms, stuff like that, sleeping bags, and they get to listen to the album if they donate… to the Daily News Hurricane Relief Fund.”