Rihanna Says Her Biggest Musical Inspiration Was Mariah Carey : ‘I Connected With Her’ 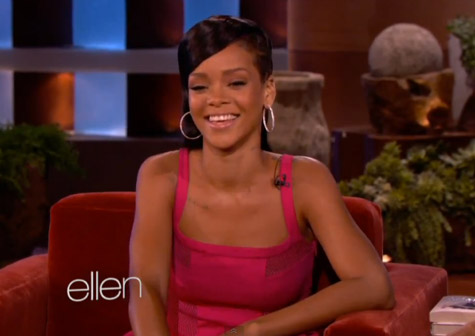 Rihanna has said that Mariah Carey was her idol during childhood. The singer, who is currently doing promotional work for her forthcoming album Unapologetic, “connected” with the diva in so many ways, saying that Carey’s story – and being bi-racial – was what made her like her so much. Appearing on The Ellen Show earlier this week, Rih praised Mariah in the interview, where she explained: “I remember looking up to people like Mariah Carey,” Rihanna told The Ellen Show. “I identified with her in so many ways.

“She was bi-racial, she was also young and I remember just hearing her story and really being connected to it.” When Ellen said it must have been a big change when she suddenly moved to the US with so many different genres in music, Rihanna answered: “Now, I moved to America and I started listening to pop music and rock music and all these other bands [and] artists that I never knew about from the ’80s, the ’70s.”

The Bajan artist says the songs that feature on her records are an inspiration from different varieties of genres, saying that she also likes stuff that may sound weird and tacky, but if it fits with the sound she is going for, she will take it: “I draw inspiration from everything, even if it’s weird, there’s always something you can find. The weirdest things are sometimes the coolest.”

While Rihanna’s career might be on top, her ex-boyfriend’s Chris Brown is just about doing okay,- of course, nothing compared to the sales he had before the incident between him and the singer went down in 2009. Reports came out that Jay-Z was angry with Chris for what he had done and allegedly threatened Brown’s career, which he has denied in a recent radio interview with Power 106: “It was cordial. It was real respectful,” Brown told US radio show Power 106. “It was nothing like that. Me and him, it was like a green room [situation] and it was cool.”

He continued: “People like to take it and run with it because they have nothing else. The funny thing is that with all these rumors and stuff, is that with other artists you’ll hear 30 different rumors in a week and maybe one sticks. Everything with me sticks, everyone believes everything that somebody says, so you don’t know what to pick from!”

The 5 Stages of Being Dumped – It’s Not All Bad!