Rihanna Unveils ‘Unapologetic’ Tracklist — You Will Not Believe Who She Collaborated With! 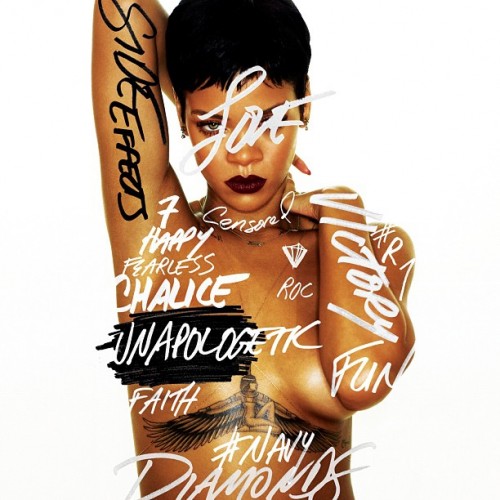 Rihanna loves to create headlines, and the person whom she was supposedly staying away from is now collaborating with her… again. If you haven’t already worked it out, yes – Rihanna has collaborated with rumored-to-be boyfriend, Chris Brown on a track titled ‘Nobodies Business’. The singer was said to have been doing very well last year, by hardly ever bumping into Chris as she was working non-stop on her world tour when she promoted her Loud album. However, things have changed and RihRih is open to give the relationship another try.

Though fans still struggle to forgive Chris for the incident that took place in 2009, where he left the Bajan singer bruised all over her face, his records continue to increase in sales every time he drops another single. But, it’s still confusing as to what the pair are trying to tell their fans: Are they together or aren’t they together? Brown also recently split from Karrueche Tran as he didn’t want his “friendship” with Rihanna get in the way of their love for each other – which actually makes no sense. If you love somebody, you wouldn’t just dump them for your friend.

Anyway, we hope Rih is being careful with this boy. That’s all we’ll say for now. ‘Unapologetic’, which hits stores later this month, was only recently completed – November 4th to be exact – as Rihanna had delayed recording sessions due to her illness after constant nights out left her having the worst hangover when she would wake up. Yikes!

The full tracklist for the album can be found below (Oh, and Eminem also appears on the forthcoming record):

Are you going to buy Rihanna’s album or will you pass?!