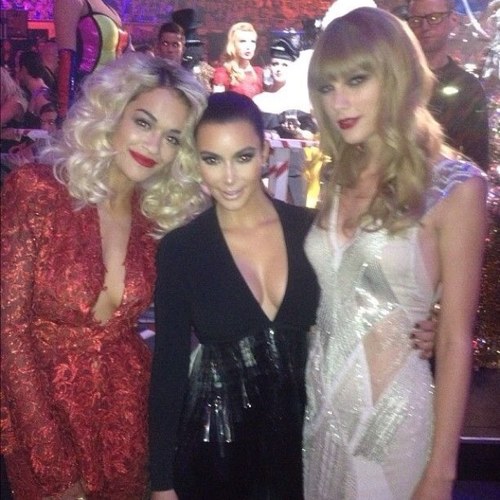 Rita Ora has said she would want to record a duet with Taylor Swift in the near future. The newcomer, who is signed to Jay-Z’s record label RocNation – the home for many artists such as Willow Smith, Rihanna and J. Cole – has been doing making a name for herself over in the States and her next move is to record a song with the country singer, and she already has a plan on how she will persuade Taylor to accept her offer… simply “be nice when approaching the situation”.

Though we wouldn’t say to Ora she should give her hopes on a duet, we certainly don’t see this happening any time soon, considering that Swift is currently planning for her North American Red tour, early next year. Taylor managed to shift 1.2 million albums of her newest record, titled Red, in its first week, making her the most-successful musican (in first week sales) and also the first female recording artist to ever achieve this.

Ora who met Taylor at the MTV EMA’s, which took place on Sunday in Frankfurt, Germany, explained how she would approach the situation of asking for a collaboration with Taylor Swift. “I would love to collaborate with Taylor Swift,” Ora told the Daily Star. “But you have to approach it in a certain way. You have to be really nice and it has to be natural.”

She recently shared how she feels she deserves the lifestyle of a musician – flying in private jets, staying in fancy hotels – because she has paid her dues early on in her career where she recalled a nasty situation she was in. “I really have paid my dues,” The Sun quotes Ora as saying. “When I get to stay in fancy hotel suites these days, I remind myself of that.  I did endless nights in Travelodges, nasty hotels and motels where the walls were paper-thin. You could hear people making love or farting in the next room. Gross.”

Rita Ora’s debut album will go on sale in the US early next year.